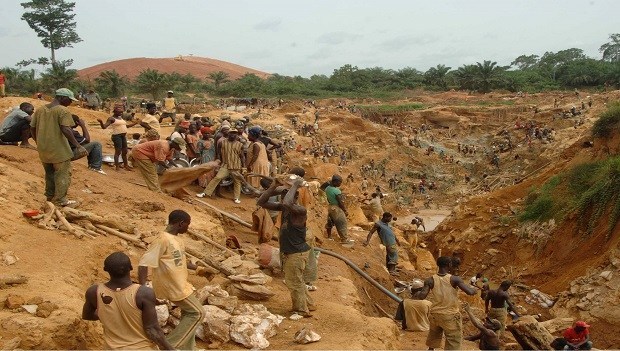 One person has been confirmed dead after an illegal mining (galamsey) pit collapsed on him at Campso, a farming community in the Juaboso district of the Western North Region.

The deceased, Kwame Amosah, 52, was part of seven working on the illegal mining site when part of the pit caved-in on Friday, May 28, 2021.

However, the others, who were trapped, managed to escape unhurt.

A resident, who spoke to Adom News on condition of anonymity, said they fled into the bush upon seeing the police vehicle at the scene.

He noted that this was not the first time such an incident had happened in the area but the miners continue to risk their lives.

The body of the deceased was retrieved by the police and has been deposited at Sefwi Juaboso Government Hospital morgue pending autopsy.

Meanwhile, the police, upon a manhunt, have apprehended those who escaped.

This comes after a similar incident happened at Breman, a mining community in the Upper Denkyira West District of the Central Region.

Three people were confirmed dead and 40 others are reportedly trapped in the mine.

Related Topics:collapsegalanse pit
Up Next