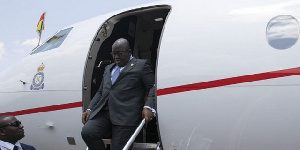 Several questions have been raised by Ghanaians and some politicians on why President Nana Addo Dankwa Akufo-Addo refused to use the presidential jet for his foreign travels and opted for Airbus ACJ320neo owned by Acropolis Aviation.

Managing Director of State Transport Corporation (STC), Nana Akomea has revealed why President Akufo-Addo rented the luxurious jet for his recent foreign travels to France, Belgium, South Africa and back to Ghana.

Firstly, he squashed claims that it was intentional for the President not to use the state’s presidential jet.

According to him, Akufo-Addo is not to be blamed as the use of the Airbus ACJ320neo for his 9-day trip was not his decision.

He indicated that it was advised that the jet was not used for more than 5 hours travel.

Based on this, the only options available for government was to either buy a new jet or charter a jet for the President when he’s going on a long-distance journey.

“The claim that President Akufo-Addo has decided not to use the presidential jet is not true. It is not president Akufo-Addo’s decision. In fact, what has been recommended since 2018 October where they almost had a crash in America…

“… the reports that came out from the experts in the military and so on was that they shouldn’t use that jet for long-distance travel and for more than 5 hours and ordered that either the president charters or we buy a new aircraft,” Nana Akomea said.

He noted “He (President Akufo-Addo) uses the jet in Ghana for his local travel and for his West Africa travel.”

Member of Parliament for North Tongu, Samuel Okudzeto Ablakwa alleged that President Nana Addo Dankwa Akufo-Addo between May 16 to 25 spent a whopping £345,000, equivalent to GH¢2,828,432.80 on his 9-day travel.

According to the North Tongu MP, he came by the total amount through his personal findings and calculations.

He averred that the private luxurious aircraft cost £15,000 per hour.