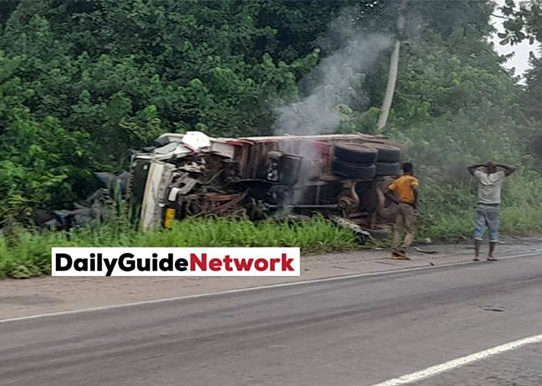 Two out of three cars, a trailer loaded with charcoal and Picanto caught fire at Akyem – Jejeti, a community near Nkawkaw along the Accra – Kumasi Highway, after one of the drivers carelessly overtook them.

The incident occurred when the Picanto driver, from Accra’s direction was on high speed while ascending the hill towards Nkawkaw trying to overtake a GPRTU Mini bus heading towards Kumasi.

The charcoal truck driver from Afram Plains heading towards Accra, when he foresaw the Picanto approaching him on his lane attempted to divert to its side but unfortunately had a collision head-on with the Picanto.

The charcoal truck then rotated on its right side and fell into the nearby bush and suddenly had its engine burst which resulted into fire. 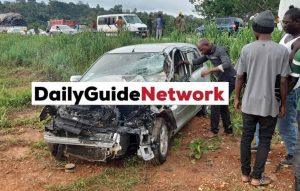 The Picanto driver also attempted controlling the situation, but unfortunately, he wasn’t spared from the fire, as it also got burnt.

The Picanto driver had to rush out from his car after crashing with the minibus which had also landed in the nearby bush.

The two vehicles were in flames at the scene, which created huge traffic on the way.

Why Akufo-Addo ditched presidential jet for £15,000 an hour airbus jet for his foreign travel