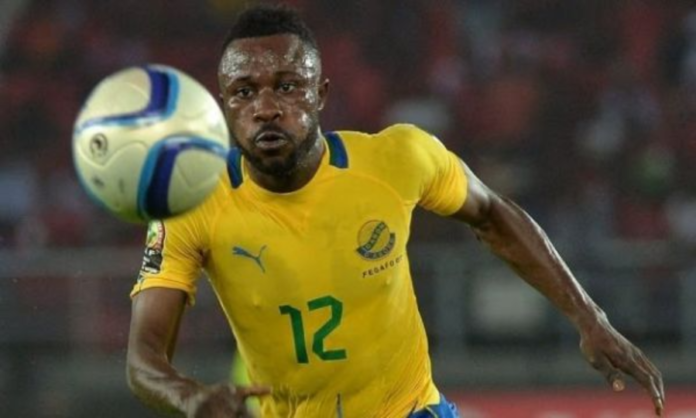 Gabonese player, Guelor Kanga, is reportedly under investigation by the Confederation of African Football (CAF) for identity fraud.

The attacking midfielder, who’s been playing in Europe for about a decade now, is being accused of not only taking more than five years off his actual age but also falsifying his nationality.

Officially, the Red Star Belgrade footballer is 30 years old and was born in Oyem, Gabon, on September 1, 1990.

However, the Federation of the Democratic Republic of the Congo affirms that this is not possible, since they know that his mother died in their country in 1986 and that he was born in Kinshasa in 1985.

He claims he is Gabonese and plays for the national team, alongside Arsenal captain, Pierre-Emerick Aubameyang, who is also the skipper of his national side.

Aubameyang is 31 and Guelor, according to the Gabonese Football Federation records, is 30.

Kanga, who is originally from Congo, was petitioned by CAF after the Congolese Football Federation (FECOFA) launched a complaint against Gabon for fielding in a player who frauded his identity.

“We hereby inform you that CAF has opened an investigation into the case in question. You are kindly requested to send us your comments concerning the allegations mentioned in the correspondence of FECOFA in order to allow us to submit the complete file to the competent bodies of CAF,” CAF said in a letter written to Gabon.

Red Star Belgrade also commented on the issue insisting that they trusted the player.

“He played in Russia and the Czech Republic and had no problems whatsoever. We see this information as a war between the two alliances over the African Cup of Nations, in which Kanga is collateral damage. We hope that the situation will be resolved as soon as possible in favour of Gelor Kanga,” the club said.

He has so far appeared for the Panthers 46 times since making his debut nine years ago.

The development now puts Gabon on the verge of disqualification from the 2021 AFCON finals.

Kanga featured for Gabon in all of their six 2021 Africa Cup of Nations qualifier matches including both legs against DR Congo.