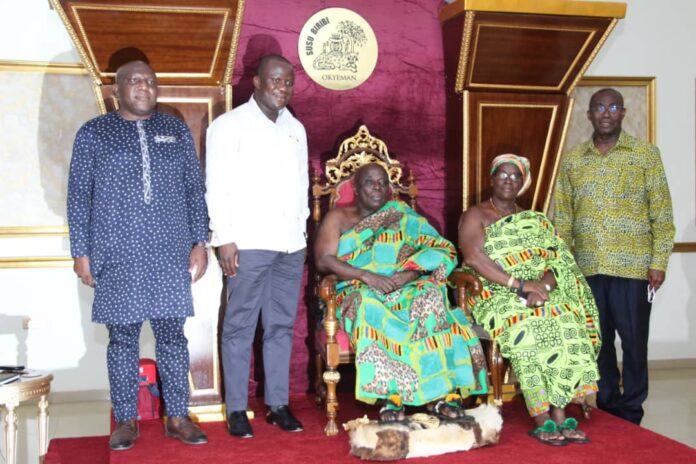 Okyenhene Osagyefuo Amoatia Ofori Panin is proposing the placement of a year moratorium on the mining industry for the state to probe the sector for reforms.

The Okyehene said the fight against illegality in the mining sector must be wholistic to forestall future recurrence and ensure sustainable mining .

“let’s stop it for proper licensing. So left to me alone, Abu, mining is banned for a year. Shut it down for investigation and proper supervisory, and resource the regulatory agency so that we do it well. I think the President and the Ministry should sit down and put on one-year moratorium on the whole mining industry so that we can look at it carefully and make sure that every license is renewed” Okyenhene said.

According to Okyenhene, after the ban, the state must ensure that “everybody who is interested in mining should now go with the new investigation. As at now we don’t know who has small scale mining, we don’t know who has large scale mining. The Public needs to know so that is clear and publish the names and the companies who have been licensed properly. Because we cannot be in the middle of a war we cannot find these things when we are fighting it so if the law goes that everybody should shut down then we begin to find out who has been properly licensed, who has prospecting license, who has recognizance license , who has a digging license and who has proper license before we can start”

The Overlord of Akyem Abuakwa Traditional area stated that “left to me, we should leave it (gold) to future generation. Because we’ve mined over 100 years and I, in particular, don’t see what we have been able to benefit”.

He however said Small Scale mining has proven to help retain wealth from gold mining in the country to improve living standards of the people given that Ghana has gained nothing significant from foreign-owned large-scale mining companies, therefore it must be properly regulated to operate.

Okyenhene called for the decoupling of minerals Commission from the Ministry of Lands and Natural Resources to become autonomous to enable it to be efficient in regulatory and supervision of the mining sector .

“We need to separate the Policymaker from the regulator. You can’t have the policy maker and regulator work the same. Minerals commission must be a separate entity from the ministry of Lands so that, the Commission should have the audacity and courage to say this is not good.You cannot have only 13 Districts that have minerals Commission offices. We need men to supervise and regulate the mining projects that people do to degrade the environment affecting the country. Minerals Commission is short-changed so we need to resource them, so that they can monitor and regulate the mining sector properly”

Osagyefuo Amoatia Ofori Panin suggested that Chiefs who are the custodians of the land must be part of the issuance of mining license to mining companies.

Okyenhene noted that the fight against illegal mining requires relentless efforts and sacrifice emphasizing that, the burning of excavators being used for illegal mining though disheartening,it is crucial to the success of the fight.

The overlord of Akyem Abuakwa Traditional area however called for a permanent military base in all mining districts to sustain the anti -galamsey fight .

“If you don’t have permanent occupancy of the Soldiers by the time you go to he exercise they would go back. They are so notorious and hard heal that they will go back .So we need permanent occupancy. The water that we drink, the food that we eat, the air that breathe are all being affected “.

He said this Thursday, May 27,2021 when the Minister of Lands and Natural Resources Samuel Abu Jinapor and his entourage paid a courtesy call on him at the Ofori Panin Fie in Kyebi as part of his tour in the region.

The Minister said the support of traditional rulers is crucial to the fight against galamsey.