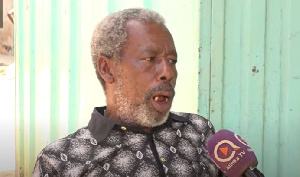 Sani Demdem, is a name that is uncommon to most Ghanaians but deserves credit for being the brain behind most of popular football names in the country.

For those abreast with Ghanaian football at the grassroot level, Sani Demdem popularly known as ‘Bra’ is the ‘mother’ of most of Ghana’s football stars.

From the Tony Yeboahs to Kofi Abangas of this world, Bra’s deep football knowledge and commitment has been instrumental in the identification and nurturing of talents.

For more than five decades, the owner of Anokye Stars has contributed to the country’s football industry in various ways.

But his efforts have seen little recognition from the the country, the association and majority of the players he has unearthed.

“We are not respected but we develop the talents. We make the shoe and the premier division coaches shine it. We pick those with no talent, train them to become world class footballers” – He told Atinka TV

“We are no equal. Between the shoemaker and shoe- shine, who is better? The colts coaches have the ideas. Look at Ebony and Kamarat, they are all nurturing players. Which course did he do? So, we make the shoe and the divisional coaches shine them. So,” he added.

He has produced over 5000 players for Ghana, out of which over 2500 have played for the various national teams and many clubs- both local and foreign over a 63-year period.