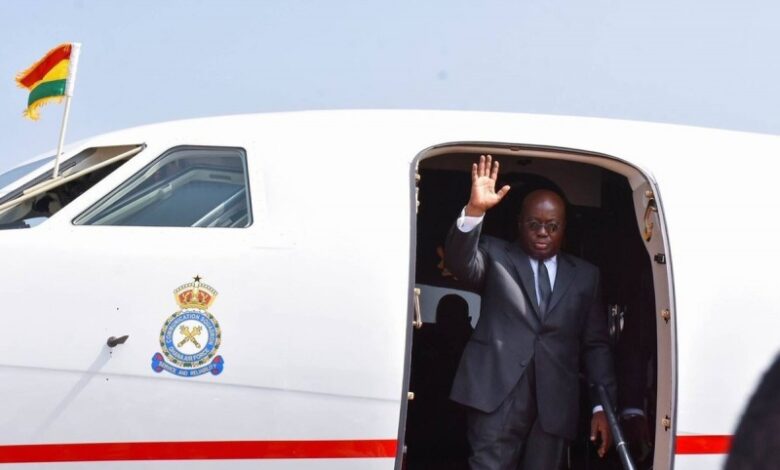 The Member of Parliament for North Tongu, Samuel Okudzeto Ablakwa has alleged that President Nana Addo Dankwa Akufo-Addo spent a whopping Ghc2.8m on a private jet on his recent trips to France and Johannesburg.

In a piece on his Facebook page, the ranking member on the Foreign Affairs Committee of Parliament alleged that the president decided to rent an aircraft that cost the Ghanaian taxpayer £15,000 an hour.

He further added that the President left Accra for Paris on the 16th of May and then from Paris to Johannesburg and back to Accra on the 25th of May accumulating a total of 23 hours amounting to a colossal £345,000. At the current exchange, the amount totals GHS2,828,432.80.

The former deputy Education Minister confirmed to Starrfm.com.gh that he has enough evidence to back his claims if the presidency denies his allegations.

Below is the full write up by Okudzeto Ablakwa.

President Akufo-Addo has been a leading voice for debt forgiveness in the international arena and back home has been imposing additional regressive taxes with the justification that the economy isn’t in a good place.

Sadly, he consistently fails to lead by example in a period of austerity where his government is appealing to struggling public sector workers to lower-wage increase expectations.

It is an outrage and a blatant betrayal for Ghana to own a presidential aircraft in perfect working condition which was ordered by President Kufuor, used by President Mills and President Mahama; and yet President Akufo-Addo chooses to charter a top-of-the-range luxury aircraft offered by Acropolis Aviation.

The Airbus ACJ320neo owned by Acropolis Aviation based in Farnborough, UK and registered as G-KELT is the most luxurious and the most expensive in the Acropolis fleet. The manufacturers describe it as “the most outstanding ambassador for Airbus Corporate Jets.” It costs the Ghanaian taxpayer approximately £15,000 an hour when President Akufo-Addo rents it.

The aircraft in issue is less than two years old and had only returned from Switzerland where it received the highest luxurious spruce up ever known in the aviation world just before President Akufo-Addo chose that particular luxurious monster. The jet can take up to 150 people in ordinary circumstances, however, it has been configured to accommodate only 17 royal passengers. The spectacularly opulent aircraft comes equipped with a lavish master bedroom, an imposing en-suite bathroom, monarchial dining facilities and round the clock IT connectivity.

President Akufo-Addo undoubtedly has the greatest taste any Ghanaian President has ever had but the question is, should that insatiable appetite for his creature comforts be at the expense of the suffering masses?

Aviation experts inform me it would have cost Ghana less than 15% of this 2.8million Ghana Cedis had President Akufo-Addo opted for Ghana’s available presidential jet which is in pristine condition. Alternatively, far more affordable travel arrangements are available which could have aligned with the President’s rhetoric for sympathy from the west for African nations.

The irony is that President Akufo-Addo engaged in this fantastic extravagance on his way to France to go beg President Emmanuel Macron for debt cancellation. Needless to add that President Macron does not travel in such splendour.

Let us imagine what GHS2.8million could do for our country, particularly considering the mess in multiple sectors which have led to legitimate #FixTheCountryNow agitations by the youth.

I have therefore filed an urgent question in Parliament to compel the Akufo-Addo administration to be accountable to the Ghanaian people on this matter and ultimately to prick their conscience to end this obscene profligacy at this time of considerable economic hardships. The African people deserve better from their leaders.

VIDEO: How a 13-year-old boy lost his life after leaving home to mine in galamsey pit