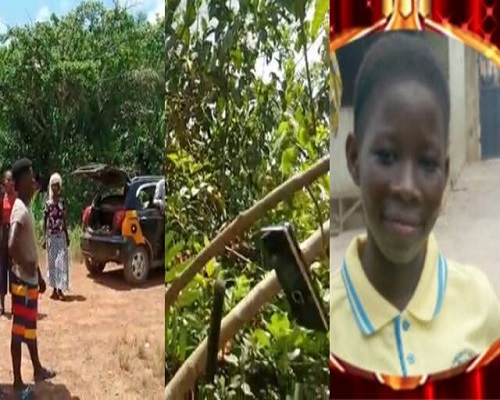 A snake has bitten a 14-year old girl to death at Assin Mmaa-Nye-Na.

A girl by the name, Shakur Yusif has met her untimely death following a snake bite in an attempt to search for a network to check her school placement in the bush.

The student of Abass D/A Basic School at Mmaa-Nye-Na gained admission at Aburi Girls and speaking to Central Regional Soiree news correspondent, Abusuapanyin Kojo Ahinful, the brother of the deceased, Munib Yusif explained that he escorted the deceased to the bush around 8 pm in pursuit for a signal when she stepped on the snake and got bitten.

Phone hanging on trees in search of signal

However, the parents of the deceased recounted that the late Shakur Yusif died on arrival at the hospital due to lack of transportation.

They made known that if the community had access to telecommunication, the situation wouldn’t have happened.

Meanwhile, some teachers complained of the lack of network in the area which is affecting teaching and learning and have therefore appealed to network service providers to come to their aid.