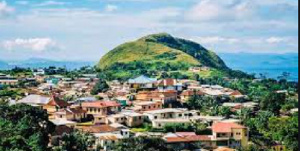 In determining the highest human habitation in Ghana, a number of places where people have lived at very high altitudes for long periods of time have been discovered.

Individuals have lived in such places for decades and have subsequently learned to evolve and flourish in the extreme weather conditions.

In the highest of mountains where the atmosphere is freezing cold, these inhabitants have somewhat adapted to the weather and have managed to build their lives around it.

With that being said, let’s look at the four most highest settlements in Ghana

20 minutes’ drive from the Volta regional capital, Ho lies Amedzofe, a small settlement believed to be the highest place of human habitation in Ghana.

Located in the Ho-West constituency, Amedzofe which literally means ‘The place where man was formed’ is 2,400 ft above sea level.

It is interesting to note that one cannot walk a distance of 20 metres in any direction without descending or climbing a mountain and at dusk, the entire community is covered with fog.

Due to the nature of the environment, the town is mostly inhabited by foreign nationals.

It has the second highest mountain in Ghana, known as Mt. Gemi which according to indigenes would have been the highest if it hadn’t spread into a surrounding community called ‘Biakpa’.

Situated in the eastern region, Kwahu has the desirably cool and pleasant climate (average 25°C) associated with elevated locations in the tropics.

Abetifi forms part of the ‘Kwahu’ towns clustered at an average distance of four kilometres from each other.

It is also referred to as the ‘gateway’ of Nkawkaw which lies at the foot of the ridge on the Accra-Kumasi highway.

Placed about 1,500 feet above sea level, the Akuapem Mountains stretching from Aburi to Akropong is the third highest human settlement in Ghana.
Located in the Eastern region, which is about 30 miles north of Accra, the tropical zone is one of the largest producers of oil palm and cocoa in the country.

Most town and villages are located on a mountain and visibility is usually poor in the morning, because of the tall trees and freezing weather. It has also got deep valleys which makes farming activities quite difficult.

Rainfall averages 127ºmm, and the weather reflects a cold mountainous climate.
Adukrom is also one of the mountains situated on the beautiful Togo Atakora hills on the main Ho-Koforidua main road in the northern part of Akuapem. It is touted as one of the highest settlements in that area.

Located in the Afadzato south district of the Volta region where the highest mountain in Ghana can be found, Nyangbo sroe is one of the highest settlements in the country. Although its exact measurement is unknown, the town which sits right on one of the chain of mountains has a relatively freezing weather.

It is believed that the village experiences snow-fall in mid-June.
It shares boundaries with Hohoe Municipal to the North, Kpando Municipal to the west, to the east with the Republic of Togo.