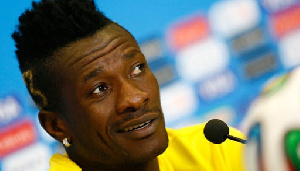 Football and opinions are undisputed bedfellows but it is also true that some opinions carry more weight than others.

So when former Ghana captain Stephen Appiah quoted a tweet by Betway asking for the top five Black Stars players between 1990 to 2021, it immediately generated significant debate and conversation on social media.

The debate centred largely around the omission of Asamoah Gyan from that top five considering his achievements. The legendary striker is the Black Stars most capped player with 109 appearances and has scored a record 51 goals in a Black Stars shirt.

Even that didn’t cut it for Appiah who instead picked himself, alongside Michael Essien, Abedi Pele, Richard Kingson and Tony Yeboah.
So what exactly did these five do in a Black Stars shirt?

Stephen Appiah is one of the best all-round box-to-box midfielders Ghana has ever produced. Appiah was firm, aggressive and physically strong, but the one thing that set him apart during his playing days was his leadership qualities.

He made his Black Stars debut on his 16th birthday, replacing Abedi Pele in a four nations tournament match against Benin in Cotonou.

Appiah humbly rose to become the Black Stars captain and then retired as a legend.

The former Juventus midfielder is best remembered for leading the Black Stars to their first-ever World Cup in 2006 in Germany. With four goals, he was Ghana’s top scorer alongside Asamoah Gyan in the qualification process.

At the World Cup, he assisted Gyan’s historic first goal and scored the winner against the United States of America to secure qualification to the round of 16.

In a total of 67 appearances, Appiah scored 14 goals.

Tony Yeboah was a tough customer for defenders. Most defenders who faced Yeboah admitted to working extra hard to overcome the heavily built striker.

His physique was terrifying and he used it to his advantage, scoring over 200 goals in his playing career.

He scored 29 of those goals for the Black Stars during a period of 12 years in 59 games.

It is unfortunate he never the tournament as he was a member of the golden generation during the 1990s.

Abedi Pele is the only player in Stephen Appiah’s list to have won a trophy with the Black Stars.

As a teenager, he was part of the 1982 Afcon winners squad. Although he made little contribution, he cherishes that medal.

Pele was captain of the golden generation in the 1990s. His team came so close in 1992 but fell when it mattered most as they lost the Afcon trophy to Ivory Coast.

Pele missed the final due to suspension.

Though he was awarded best player of the tournament, Pele regrets the ‘needles’ yellow card he picked up in the semi-final victory against Nigeria.

Aside from that, his Black Stars career was successful. He made over 70 appearances and scored 33 goals.

Michael Essien was an outstanding midfielder. He formed the perfect partnership with Stephen Appiah and Sulley Muntari, with Essien being the anchor.

The former Chelsea man displayed strength, stamina and determination. Qualities that earned him the nickname ‘The Bison’. Despite playing mostly as a deep-lying midfielder, Essien managed to find the net in important games for the Black Stars.

His goal against South Africa in the 2006 World Cup qualifier in Johannesburg was crucial as Ghana booked a place in the main showcase.

Also, his goal in the 2008 Afcon quarter-final victory against Nigeria will forever be cherished by fans who had the opportunity to watch him play.

He retired from Black Stars after the 2014 World Cup in Brazil. Essien was a key member of the first-ever world cup squad in 2006 and participated in two Afcons.

But for Essien, some Ghanaians feel he wasn’t committed enough to the Black Stars. Essien took a three-year break after not being included in the 2010 World Cup squad due to a knee injury.

Despite being in the Black Stars since the 1990s, he became a household name after the 2006 World Cup.

Before the tournament, Olele was behind Sammy Adjei and George Owu in the pecking order, but head coach Ratomir Djokovic saw something special in Kingson.

Djokovic made him first-choice goalkeeper in Germany and he ended up as one of the country’s best players at the tournament.

He held the position for six years as he was replaced at age 34. Olele is the second most capped Black Stars player with 93 appearances. Surprisingly, he scored one goal.

Appiah’s controversial exclusion of Gyan can be understandable especially when he has chosen players with impressive Ghana CVs too. With malice or without, however, that won’t stop the intense debate.