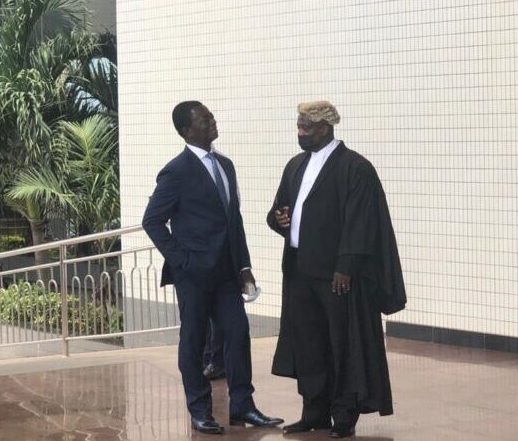 The Criminal Division of the Accra High Court presided over by Justice Clemence Jackson Honyernugah has ordered Dr Opuni and two others to open their defence in the COCOBOD trial.

Ruling on a submission of no case, the court said, the Prosecution succeeded in proving all the charges against the accused person.

The court said it is convinced that a prima case has been established against Dr Opuni and the two others.

Meanwhile, the court has acquitted and discharged Seidu Agongo and his company of three of the 27 charges, counts (22, 23 and 24).

Dr. Opuni, Seidu Agongo and Agricult Ghana Limited are standing trial for 27 charges of causing financial loss to the state, defrauding by false pretences, conspiracy to commit crime, abetment of crime, money lingering, corruption by public officer and contravention of the PPA Act.

Together, they are accused of causing a financial loss of over GH¢217 million to the state through the sale and purchase of the controversial Lithovit Liquid Fertiliser, which according to the prosecution, was never tested.

Submissions of no case

Dr. Stephen K. Opuni and private businessman, Seidu Agongo, filed separate applications asking the court to acquit and discharge them in their ongoing trial for allegedly causing financial loss to the state.

They are facing 27 counts including causing financial loss of over GH¢217 million to the state through the supply and purchase of Lithovit Liquid Fertiliser for COCOBOD.

The accused persons in their respective submission of no case are arguing that the prosecution at the end of its case failed to adduce sufficient evidence to prove any of the 27 charges levelled against them.

Dr. Opuni through his counsel, Samuel Codjoe, argued that he has no case to answer on the “basis that no evidence has been led by the prosecution to establish any or all of the ingredients of the offences for which 1st accused is standing trial.”

He argued that “the prosecution has failed to make out a sufficient case to warrant calling 1st accused to open his defence.”

For his part, Seidu Agongo and his Agricult Ghana Limited, the company that entered into the Lithovit transaction and for which reason it has been charged alongside the owner (Agongo), are arguing that “while there is generally no evidence against the 2nd accused person (Seidu Agongo), what little evidence the prosecution purported to have offered against the 3rd accused person (Agricult Ghana Limited) on any of the charges had been very much discredited during cross-examination or otherwise so manifestly unreliable, rendering any such evidence of the prosecution unsafe so that this honourable court cannot reasonably or safely rely on same to convict the applicants herein in the absence of an explanation from them.”

The Director of Public Prosecutions (DPP), Yvonne Atakora Obuobisa who led the prosecution, called seven witnesses to testify in the case.

All the witnesses were vigorously cross-examined by defence lawyers, some spanning about six months.

On March 29, 2021, the prosecution ended its case after Chief Inspector Thomas Prempeh Mercer, the investigator and the seven witness was cross-examined by the defence lawyers.

The court presided over by Justice Clemence Jackson Honyenuga, a Supreme Court judge sitting with additional responsibilities as a High Court judge, invited them to mount defence.

Opposing to the accused persons submission of no case, the AG’s Department argued that, they have adduced sufficient evidence to compel former CEO of COCOBOD, Dr. Opuni, and Seidu Agongo, and his Agricult Ghana Limited, to open their respective defence.

It was the case of the AG that the state was able to prove all the elements in the 27 charges levelled against Dr. Opuni, Agongo and Agricult, who are standing trial for causing financial loss to the state.

The AG is therefore urging an Accra High Court hearing the case to dismiss the applications for submission of no case filed by the accused persons and order them to open their defence.

The prosecution, in responding to the submissions of no case filed by lawyers for the accused persons, said it was able to establish a prima facie case against all three accused persons through their seven (7) witnesses they called to testify at the trial.

The prosecution is contending that contrary to assertions made in the accused persons’ submissions of no case applications, the evidences of the prosecution witnesses were not in any way discredited under cross-examination, and their evidence remains credible and reliable.

VIDEO: Parents cry as Chief demolishes School for construction of his palace at Adumasa