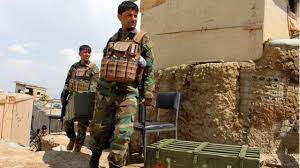 The US secretary of state has told the BBC that the US will respond to reckless or aggressive acts by Russia.

Antony Blinken said the US was focused on actions such as the treatment of opposition figure Alexei Navalny, the Solar Winds hack and election interference.

“We would prefer a more stable and predictable relationship,” he said.

Mr Blinken was in the UK for a meeting of foreign ministers of the G7 group of industrialised nations.

A statement issued after the two-day talks criticised Moscow for its “irresponsible and destabilising behaviour”, particularly against Ukraine, and for cyber-attacks.

Mr Blinken echoed those sentiments on Thursday, offering support to Ukraine during talks in Kyiv with its President Volodymyr Zelensky, who said his country was under threat from Russian troops massed near its border.

The US and Russia have been long-term adversaries and remain far apart on major issues.

In February, US President Joe Biden said he had made it clear to Russian President Vladimir Putin “that the days of the United States rolling over in the face of Russia’s aggressive actions [were] over”.

But Mr Biden’s predecessor, Republican Donald Trump, said during his presidential campaign that he would get along with Mr Putin. He sought to improve ties while in office, a stance at odds with traditional Republican party policy.

A steady and dependable ally

After the intrigue, phone calls and blackmail that dominated the Trump administration’s dealings with Ukraine – the presidency of Mr Biden was what many Ukrainians wanted. They are hoping for a steady and dependable ally.

Mr Trump was impeached in 2019 over allegations he improperly sought help from Ukraine to boost his chances of re-election. He was acquitted, but the saga certainly strained US-Ukraine relations.

Mr Blinken has promised to reinvigorate the relationship. He has been keen to stress that the US stood with Ukraine against Russian aggression, and has said that he is looking at ways of strengthening security co-operation.

To enhance its security, Ukraine would like to become a member of Nato – a military alliance of countries from Europe and North America. But there was little encouragement on that front, and Mr Blinken simply said that those aspirations had been discussed.

Mr Blinken told BBC Radio 4’s Today Programme that the Biden administration was not trying to hold China back, stressing that the US was in favour of upholding a rules-based international system.

He said countries needed to look very carefully to see if China was investing in their strategic assets.

On Afghanistan, Mr Blinken insisted that the US was “staying in the game” and would remain engaged with the country despite its troop withdrawal.

The Biden administration has announced that the last US soldiers will leave by September.

Mr Blinken said regional powers might have to “step up” and use their influence and try to keep the country on a positive path.

Twenty years in Afghanistan – was it worth it?
What about Northern Ireland?

Asked about a possible trade deal with the UK and the situation in Northern Ireland, Mr Blinken said the administration remained very focused on peace in Ireland.

The secretary of state said that for President Biden it was important that “whatever is done, whatever we do, the gains of the Good Friday Agreement are sustained and we have the political and economic well-being of Northern Ireland in mind”.

Joe Biden has previously said that Brexit must not endanger the 1998 Good Friday Agreement, which effectively ended Northern Ireland’s “Troubles”.

Post-Brexit trade arrangements for Northern Ireland have led to tensions there and contributed to the recent resignation of First Minister Arlene Foster.