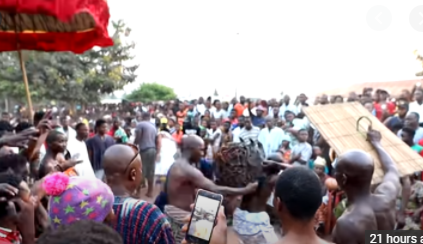 Inside Sesseman, a remote village at Nkoranza north in the Bono East region lies an ‘ntoa’ deity which inspired a festival that has been celebrated for over 500 years.

The ‘Forkuo afahye’ although not very popular has been touted as Ghana’s biggest and oldest festival of all times and this is because it has been in existence even before colonization.

40 days before the festival, the Sesseman township is plunged into a state of reflection which is characterized by a ban on noisemaking. This is because it is believed that the ‘ntoa’ goes into hibernation during that period.

‘Ntoa’ makes an appearance after 40 days when the date for the festival is due.

The week-long festival is commenced with a special drumming to announce its opening and anyone that makes a mistake whiles playing that particular drum dies.

Although unclear why people die from playing the drums wrongly, it is believed that the slightest mistake prevents the deity from coming out of its shrine.

Also, inhabitants are expected to grind and smear charcoal on their bodies. The charcoal is usually extracted from some specific trees.

It is believed that the ‘ntoa’ deity has fought great battles on behalf of the town, provided security and has made the land flourish.

Up until now, ‘ntoa’ who’s source cannot be traced serves as the main mediator through which prayers are transferred to Oboade (The creator).

In an exclusive video by Magraheb TV cited by GhanaWeb, it is stated that the shrine in which the deity currently resides was built in 1918.

Intriguingly, no church is allowed to operate in Sesseman as ‘ntoa’ has been established by the inhabitants as their one and only true god aside ‘oboade’ (The creator).

In relation to that, residents who are Christians visit neighbouring towns to worship.

Watch the video below for more interesting details about the festival

No matter how good you treat a woman, she’ll cheat – Bugri Nabu