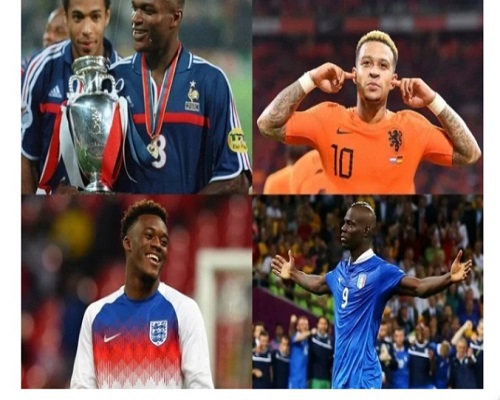 Ghana, over the years, can boast of having had a plethora of incredibly gifted players represent the country in tournaments, qualifiers, or friendly games.

Even though the team has paraded some of the very best time and again, the team could have been a lot stronger and more impactful if some players decided to represent the country.

In recent years, the likes of Adam Larsen Kwarasey, Kevin-Prince Boateng, Quincy Owusu Abayie, Kwesi Appiah and Alexander Djiku, among others, all chose to represent the Black Stars of Ghana instead of the countries they grew up in.

However, many players of Ghanaian descent have also rejected the chance to play for the four-time African champions.

This list shows the top five players who could have chosen Ghana but didn’t.

The Bayern Munich centre-back is the biological brother of Kevin-Prince Boateng, who represented the Black Stars in two FIFA World Cups.

As a matter of fact, Jerome and his brother made history as they became the first biological brothers to feature for two different countries in a FIFA World Cup match.

The 32-year-old, who is born to a Ghanaian father and German mother, has visited the West African country before, describing the experience as “emotional”.

According to Jerome Boateng, he had always wanted to represent Germany and not Ghana despite the fact that the gFA contacted him, according to a report by ghanasoccernet.

“For me, it was from Day 1 Germany. It is where I grew up, played for the youth teams. I do feel my African side, but I’ve always wanted to play for Germany,” Jerome said.

“Ghana did contact me, but I told them and my dad that I was sure I wanted to play for Germany,” he added.

There are several reports that indicated that the Ghanaian FA wanted the service of the Italian striker, but he constantly turned down the chance to play for the Black Stars.

Both parents of Balotelli are Ghanaians, but they immigrated to Italy over three decades ago to find greener pastures in the European country.

Mario Bawuah Balotelli was however born in Palermo.

Balotelli has since gone on to play 36 games for Italy, scoring 14 goals in the process.

The 26-year-old is of Ghanaian descent as he was born to a Ghanaian father and a Dutch mother in Moordrecht.

The Lyon star, despite not featuring for the Black Stars, often comes to Ghana to relax and support children with special disabilities among many other things.

Despite the strong ties, Depay chose to represent The Netherlands national team.

The Chelsea winger is perhaps Ghana’s biggest loss in recent years as the 19-year-old has been touted as the next big star in world football.

The teenager had his breakthrough two seasons ago but his progress took a dive when he sustained an Achilles injury.

Despite being born to a Ghanaian father, Hudson-Odoi is ineligible to play for the Black Stars as he has been capped three times already by the Three Lions of England.

The teenager made his competitive debut for the Three Lions in a 5-0 win over the Czech Republic in a Euro 2020 qualifier.

The France legend is arguably the greatest footballer born in Ghana to have never played for the Black Stars.

The former Chelsea, AC Milan centre-back had an illustrious career and went on to win every trophy possible in football; from the FIFA World Cup to the UEFA Champions League and many other trophies in France, Italy, England, and Qatar.

Marcel Desailly was born with the name Odenke Abbey to Ghanaian parents but his mother remarried and his entire family relocated to France, where he went on to feature for Les Blues.

He is currently a Laureus Academy member and an OrphanAid Africa Lifetime ambassador to Ghana and France (since 2005).

He has opened a sports facility in Ghana called Lizzy Sports Complex (June 2011), in memory of his late mother, geared to hone the talents of young players and children in particular.