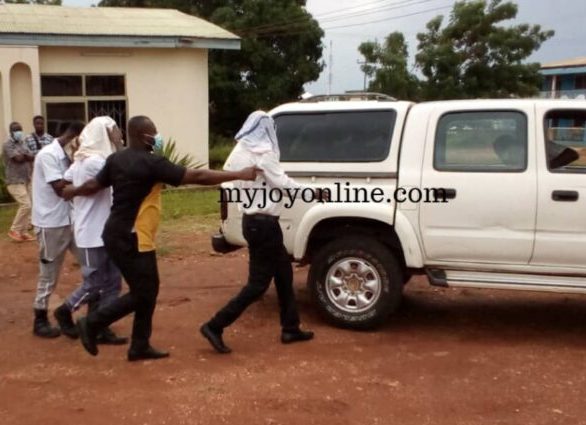 The Sunyani Circuit Court A has remanded the three police officers and three others, who allegedly brutalised a suspect in custody to death and secretly buried him, into prison custody.

The six were charged on two counts; conspiracy to commit a crime to wit: murder, contrary to section 23(1) and 46 of the criminal offenses Act, 1960 (Act 29), and murder.

The suspects, General Constable Ebenezer Akuffo, 24; General Corporal Williams Akussung, 38; Chief Inspector Eric Aforo, 48; all police officers at the Seikwa station are accused of agreeing with a common purpose to commit a crime and intentionally and unlawfully caused the death of Abu Nepah, between April 16 and 17.

The others accused of the same offence are Reuben Obeng 22, and Aaron Abbey, 21, security guards, and Emmanuel Ofori Kingsford, 59, the banker at Nkoranman Rural Bank.

The court presided over by His Lordship Jojo Hagan remanded the suspects to police custody to reappear on 11th May 2021.

The prosecutor, Supt Joseph Apaloo said an autopsy conducted on the body of the deceased person by Dr. Ernest K. Adjei, a senior specialist pathologist from Komfo Anokye Teaching Hospital, Kumasi, on Sunday gave the cause of death as chest injury and blunt trauma to the chest.

He said the pathologist concluded that the manner of Abu Nepah’s death is unnatural.

The accused persons were arrested on Monday and have been assisting in investigations.

The fact of the case is, on Friday 16th April 2021, at about 6 pm, Abu Nepah, now deceased, was arrested and sent to the Seikwa police station by Emmanuel Ofori, the bank manager, and the two security guards for damages caused to the rear windscreen of his Toyota Highlander vehicle with registration no. AS 2000 X.

The suspect allegedly resisted and was subjected to beatings before he was handed to the police.

He was allegedly beaten and handcuffed to a pillar at the station when he continued to resist. The station officer, Chief Insp. Eric Aforo allegedly directed he stayed there overnight.

On Saturday, April 17, 2021, the station officer noticed that the suspect had defecated on himself and littered the premises with human excreta, and instructed General Constable Ebenezer Akuffo and General Corporal Williams Akussung to release the suspect to clean the place.

But on the same day, around 12:10 pm, the suspect collapsed and the officers rushed him to the Seikwa Health Center for treatment, but he was pronounced clinically dead on arrival by the staff on duty.

Insp Eric Aforo, on the same day, took the body, and buried the 48-year-old farmer at the Seikwa public cemetery. The deceased was assumed to be a pauper since his relatives were not immediately known.

The three police officers, on Sunday, April 18, 2021, realizing that they had breached procedures and sensing danger, exhumed the body and deposited it at Best Care mortuary, Mantukwa, on the Berekum Sunyani road.

The case was transferred to the Regional Police CID in Sunyani on Wednesday, April 21, 2021, and the officers were subsequently interdicted on April 23. The accused persons were arrested on Monday, April 26 and are assisting in investigations.

Insp. Joseph Apaloo, the prosecutor said, the security guards admitted to slapping the deceased many times, Emmanuel Ofori also admitted he tried slapping him at the police station but could not reach him because the deceased was behind the counter, and Constable Ebenezer Akuffo admitted using a small cane to hit his hand.

He, however, said corporal Williams Akussung and Chief Insp. Eric Aforo denied any involvement in the alleged torture.

The 6 made their first appearance at the court on Tuesday, April 27, 2021, and have been remanded to prison custody to reappear on 11th May 2021.