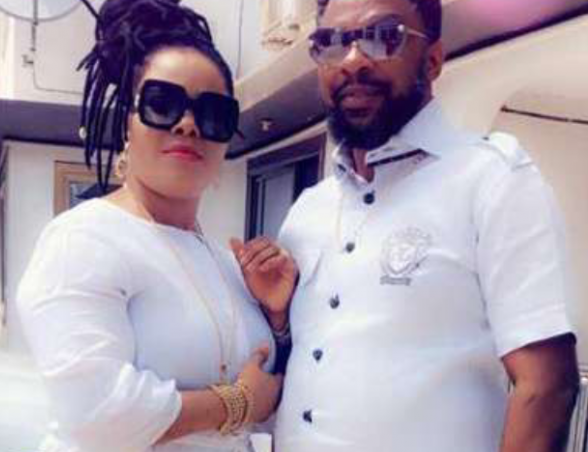 Speaking at a press conference addressed by his wife on Monday, Pastor Koranteng who described the development as monumental, he said it has taken him five years of constant efforts to have finally gotten his wife to renounce her activities.

When you listened outside you would’ve heard people insulting me asking why I am married to a fetish priestess as a pastor. Being a fetish priest did not mean she was less of a human. These are the people God wants to do his work. She is my wife and I can’t say because she was a priestess, I was leaving her to marry another woman, that’s not what we are taught. It took us five good years, myself and my senior pastor to come to this day.,”

He however emphasized that everything that has happened before his wife renouncing her fetish life was part of God plan and expressed gratitude to God.

Komfo Agradaa who throughout the press conference was clutching onto a big Bible said her brief stint in the jail cell of the National Security had helped him to go into a covenant with God which was premised on the condition that she will work for God if she is finally released.

Officials of the National Communications Authority, together with officers of the National Security and the Police on Wednesday, April 21, 2021, stormed the media house of Nana Agradaa and caused the closure of her television stations, Thunder TV and Ice One TV.

According to the NCA, the priestess had her TV stations running without fulfilling licensing requirements. She was arrested during the operation and arraigned her before a court after spending a day in cells.

She was subsequently granted bail by the court.

Akufo-Addo deploys 200 soldiers to clamp down on galamsey