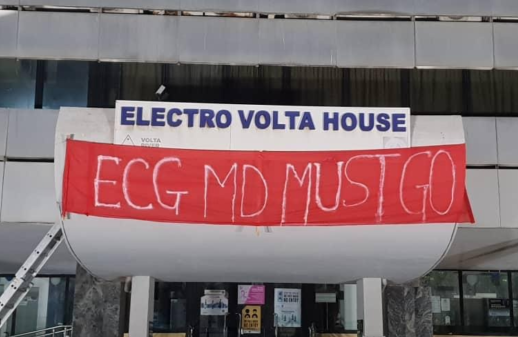 Staff of the Accra East branch of the Electricity Company of Ghana (ECG) on Monday morning embarked on a strike in protest against the Managing Director of the company.

The workers are asking for the removal of the MD, Kwame Agyeman Budu with the argument that he was “incompetent” and that his continuous stay in office will collapse the company.

According to the workers, mainly from the junior and senior staff association, Mr Agyeman-Budu was “mismanaging” ECG, hence they want his immediate removal.

Reacting to the workers initial agitation, Mr Agyeman-Budu, described the accusations and allegations against him as untrue.

He insisted the company, under his leadership initiated the one-day, one-service for new meters for customers.

He said claims that he did not approve the provision of adequate materials for the company’s operations is because there had been shortages due to the COVID-19 pandemic, adding that most companies from whom they buy the materials folded up and are not producing.

According to him, accusations of lack of accessories for vendors are also unfounded because ECG does not procure accessories for vendors. Mr. Agyeman-Budu said it is also not true that he stopped revenue mobilisation in June 2020, explaining that government subsidized electricity for some months and instructed that no form of revenue or disconnection of power should be done, with other companies like VRA, Ghana Water, and GRiDco, also adhering to the directives.