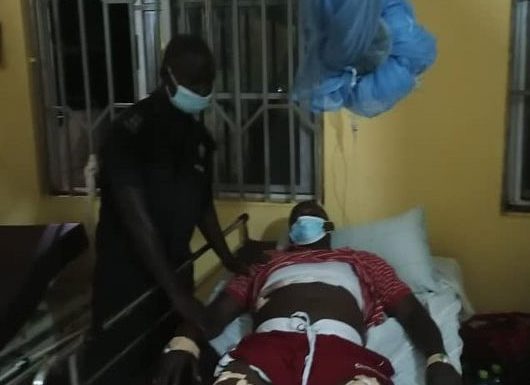 SERGEANT THOMAS Akoka of Juaboso Police Station is battling for his life at St John of God Hospital at Sefwi Asafo in the Western North Region after sustaining eight gunshot wounds from armed robbers.

The policeman was reportedly on escort duty at Kotosaa near Juaboso when he was attacked by about four armed men suspected to be armed robbers who sprayed the bullets on his body.

According to information gathered by DGN Online from the police report, submitted by Inspector Edward Anim, the incident happened on Saturday, April 24, 2021, at about 1:30 pm.

Sergeant Akoka was rescued by a reinforcement team from the area District Police Headquarters upon a distress call and was rushed to the hospital for treatment.

He was said to be responding to treatment at the emergency ward of the health facility at Sefwi Asafo.
The Inspector-General of Police, James Oppong Bonuah, and Director General Police Welfare, COP Maame Yaa Tiwaa Addo Danquah had reached out to the distressed cop.