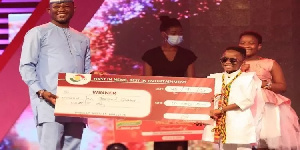 Singer Raymond Nyarko, known on stage as Akwadaa Nyame, has emerged as the winner of TV3’s Talented Kidz XII.

With his Highlife rendition in the grand finale on Sunday, April 25, the promising singer – believed to hold the torch to the bastion of the genre – beat competition from five others to be crowned the winner.

The stage for the grand finale was opened with a rendition of Amandzeba Nat Brew’s Kpanlogo by singer Blessing Alovor.

The dramatic entry by Spike Gee, who stormed the stage carried shoulder high by heavily built men, was a sneak peek to what awaited patrons on the night.

No wonder, dancer Andy Dabo won the heart of award-winning singer Becca, who generously doled out her proceeds from being a guest judge in the finals to the youngster.

But after the first round, Andy Dabo and Spike Gee were evicted.

That round saw the four finalists battle it out, performing with their mentors.

But at this point he was unstoppable.