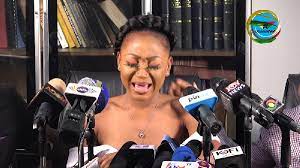 Socialite and video vixen Rosemond Alade Brown, popularly known as Akuapem Poloo says her 90-day sentence came as her shock to her.

The popularly Instagram star, who says she regrets taking the nude pictures with her son, revealed that she was dumbfounded when the sentence was read to her.

Addressing the media for the first time after her bail, Akuapem Poloo expressed her profound gratitude to all celebrities and media personalities who supported her.

“Although I knew what I did was bad I was not expecting a jail term, the 90-day sentence actually came as a shock and I couldn’t speak or do anything as the judge read out the sentence,” Poloo told journalists.

She called on her fellow celebrities to desist from taking nude pictures as it could land them in jail.

The sentence was after the socialite and video vixen was convicted after pleading guilty to publishing nude pictures on social media.

Rosemond Brown was convicted by an Accra High Court based on her own plea.

The self-acclaimed actress was charged with publication of nude pictures involving her seven-year-old son.

The court had remanded her into custody for the prosecution to take her to any Government hospital to carry out a pregnancy test on her.

Her hearing was dragged after her defense counsel pleaded for a long adjournment as she would be travelling to Nigeria where she had signed a contract for the production of a reality production show.

Akuapem Poloo was convicted and subsequently sentenced on three counts of publication of obscene materials, engaging in domestic violence, conduct that in any way undermines another person’s privacy or integrity and engaging in domestic violence, namely conduct that in any way detracts or is likely to detract from another person’s dignity and worth as a human being.

The Socialite is currently on bail pending hearing of her appeal.

Related Topics:Nude pictures
Up Next

VIDEO: My biggest task was drawing Stonebwoy’s mother on his back – Popular tattoo artist reveals