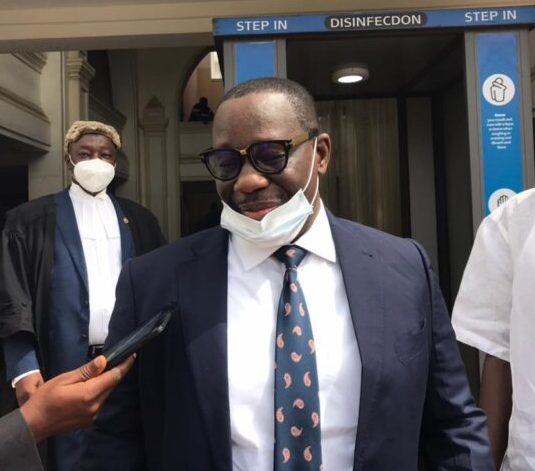 State prosecutors have brought fresh charges against a former Director-General of the Social Security and National Insurance Trust (SSNIT), Mr Ernest Thompson and four others for causing financial loss to the state.

This latest charge follows a Supreme Court ruling that the particulars the state had provided to support the charge of causing financial loss to the state against the accused persons were scanty and inappropriate.

Mr Thompson and four others have been accused of causing a financial loss of more than $14.8 million in the SSNIT Operational Business Suite (OBS) project.

In Court on Thursday, State Attorney, Gyambiby said they have filed a new charge sheet on April 20, 2021, in compliance with the orders of the Supreme Court.

This he said that his understanding is that in terms of this proceedings not all the accused persons are involved.

Counsel for Ernest Thompson, Samuel Codjoe said they have not been served with the new charge.

Lawyer Baffuor Asase Gyimah also told the court that, when the prosecution filed the new charge sheet Mr Gyambiby did inform him.

Lawyer George Bernard Shaw told the court, “We have not been served with the said amended charge and therefore cannot speak to the accuracy or otherwise of the charge sheet.”

The lawyer for SSNIT who is one of the accused people, Hayibor told the court, “We have also not been served.”

The Criminal Division of the Accra High Court presided over by Justice Henry Anthony Kwoffie, Court of Appeal judge sitting with additional responsibility as a High Court judge called for the Bailiff and he served all accused persons inside the courtroom.

The State had gone to the apex court to challenge the Court of Appeal’s ruling that the particulars of offence levelled against Thompson were scanty.

A unanimous ruling of a five-member panel of the Supreme Court presided over by Justice Yaw Appau on March 17, said the charges preferred against the accused persons do not meet the constitutional requirements.

The panel ruled that the apex court is in agreement with the ruling of the Court of Appeal and so there is no merit in the application filed by the state.

The presiding judge after the court dismissal of the application charged the Director of Public prosecution Mrs Yvonne Atakora Obuobisah, to go back and look at the charges and provide enough particulars to them.

He said the country has gone past the stage where accused persons are surprised by the state.

They have pleaded not guilty to the charges with the trial yet to commence at the Accra High Court due to the legal tussle over the particulars of the offences.

The former SSNIT boss wants the charges against him struck out on grounds that the prosecution failed to provide adequate particulars of the offences as required by law.

However, it is the case of Mr Thompson that the prosecution failed to provide sufficient particulars on the offences levelled against him as required under Article 19 (2) of the 1992 Constitution and Section 122 of the Criminal Offences (Procedure) Act, 1960 (Act 30).

His lawyers argued that the particulars are so scanty that they do not afford their client any concrete information to enable him to mount his defence.

The offences levelled against Mr Thompson and the other accused persons include willfully causing financial loss to the state, conspiracy to commit the crime, defrauding by false pretence in contravention of the public procurement act and authoring of forged documents.

The former SSNIT boss first filed his application before the trial court, presided over by Justice Henry A. Kwofie, a Justice of the Court of Appeal sitting as a High Court judge, but it was dismissed on April 19, 2019.

Dissatisfied with the decision, Mr Thompson appealed to the Court of Appeal on the grounds that Justice Kwofie committed an error of law and also erred by dismissing his application.

On April 3, 2020, a three-member panel of the Court of Appeal in a 2-1 majority decision upheld Mr Thompson’s appeal and held that, indeed, the particulars to information to enable the Applicant to defend himself.