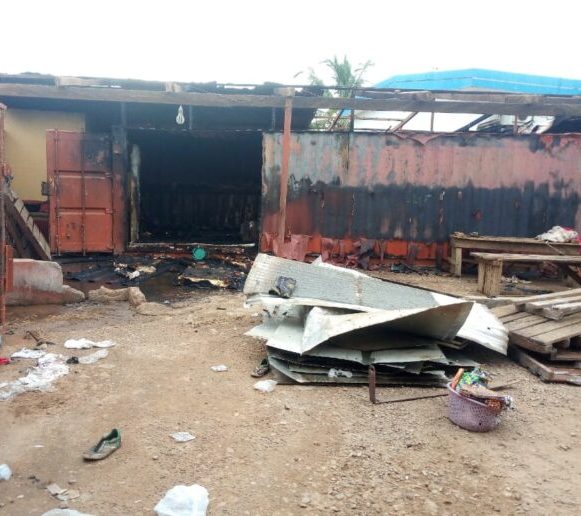 A group of angry youth in Mankessim in the Central region have demolished the foundation and temporary fence of a new market structure in the area.

The site which used to have the Municipal Assembly was cleared to construct the new market following the fire that ravaged the previous market a few days ago.

According to information gathered by Kasapa FM’s Yaw Boagyan, the unidentified youth embarked on their rampage while the contractor was on-site working.

Yaw Boagyan gathers that the said foundation and the fence are the main reasons why the fire service couldn’t enter the market with their fire tenders to quench the fire which destroyed numerous properties Tuesday evening and as a result, several containers and uncountable shops were burnt down.

The MCE Kenneth Kelly Essuman told Kasapa FM that the building of the new market was a benefit they got from the government’s one million per Constituency Policy.

According to the MCE, he has prepared a new site for the Drivers in that area to go and work but they have decided not to go making the place congested.

The angry MCE said, he will descend on the drivers who refuse to leave that land for the construction of the market.

Meanwhile, the Member of Parliament for Mfantseman Constituency Hon. Ophelia Mensah Heyford also urged the drivers to leave the construction site to pave way for the construction of the market immediately.

According to the Member of Parliament, the government has invested a huge amount of money into the construction of the new market so she is appealing to the Drivers to leave that land.