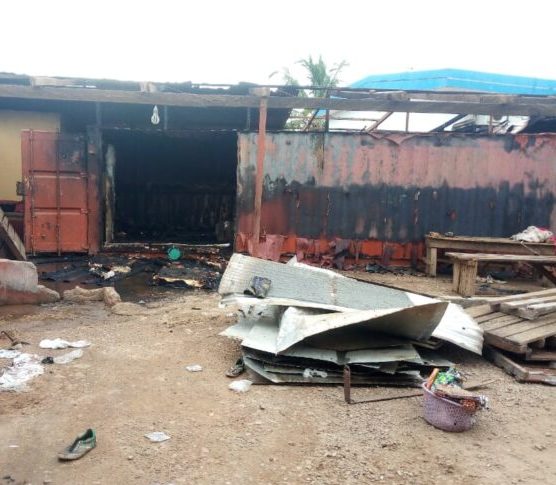 Information gathered by EIB News’ Yaw Boagyan indicates that the fire started from a cold store at Mankessim in the Mfantseman Municipality of the Central Region.

The fire destroyed over 20 containers including over five other cold stores in the process.

The Director of Veronica Enterprise, Rebecca Baah, narrating the incident said the fire reportedly started Monday evening while in Church after getting a distress call from a neighbor but residents were unable to bring the fire under control.

She said “I was called that one of the 40-footer container cold store is on fire, by the time we got to the scene everything was burnt to ashes. But the other shops were not affected by the outbreak due to the timely intervention of the Fire service personnel”.

Mrs. Baah added, “We are calling on government and corporate bodies to come to the aid of the affected persons”.

Reports from some of the shop attendants said they saw smoke coming from one of the cold stores after the lights in the area went out and came back on. According to them, the recent light out in the Mfantseman Municipality nowadays is alarming and beyond their limit so they want the government to do something about it for them.

Meanwhile, the fire service personnel are yet to investigate the cause of the fire outbreak.

Give us the cars you promised – Okada riders to Bawumia