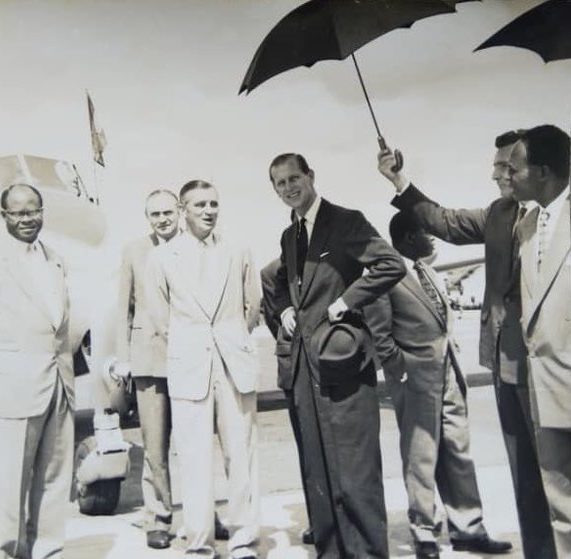 The Duke of Edinburgh, the late Prince Philip, was laid to rest in the Royal Vault of St George Chapel last Saturday after what is now the smallest gathering for any royal funeral in history.

The late consort was also the longest-serving in the history of the British monarchy, having been the husband of Queen Elizabeth II for 74 years, and dying at the age of 99.

His death also marked the first time a reigning monarch has been predeceased by his or her spouse since Queen Victoria.

How then is this celebrated consort of the British monarchy relevant to a country as Ghana, having been recorded to have traveled 143 countries in his lifetime?

In 1959, during the presidency of Dr. Kwame Nkrumah, the Duke of Edinburgh, Prince Philip, came to the country to, as part of many other official things, attend the presentation ceremony of the presentation of an aeroplane to Ghana Airways.

In a photo shared by @GhanaianMusuem on Twitter, it showed how the late Duke was in the company of Kwame Nkrumah.

“Prince Philip, Duke of Edinburgh at Ghana Airways aeroplane presentation ceremony in 1959. In his company are Dr. Kwame Nkrumah (first from Right) and James Mercer Esq (First from Left), the first chairman of Ghana Airways,” the tweet read.

That will not be the only time Prince Philip will interact with leaders of Ghana, or visit the country though.

His first visit to Ghana happened four years after Ghana had secured independence from Britain.

From November 9 to 20, 1961, Prince Philip and his wife were in the country and it was during that visit that the famous picture of Ghana’s first president Kwame Nkrumah dancing with Queen Elizabeth was captured.

His next visit was in 1999 when the country was under the presidency of the late Flt. Lt. Jerry John Rawlings.

As in most cases, the Duke Edinburgh had accompanied his wife to the ex-British colony.

His third and final visit which came in 2008 was interestingly without his wife.

Spiritual ring: Another teenager’s finger rotting away at Pantang (PHOTOS)