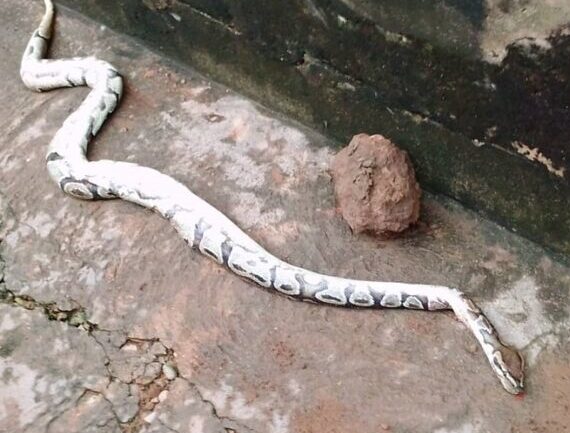 Some residents of Breman Asikuma in the Central Region have been thrown into a state of fear following the discovery of a python in a room in broad daylight.

A little girl who is reported to have found the reptile after a heavy rainstorm in the area Sunday afternoon raised an alarm for help to kill the python.

However, people around including men were afraid to go near the python let alone kill it.

Eyewitnesses told Kasapa News Yaw Boagyan that it took a courageous woman in the area popularly known as Yaa Asantewaa to kill the python by striking its head with a stone.

The Assemblyman of the Ekumfi Electoral Area, Hon. Evans Okyere Jackson expressed shock over the incident saying pythons are found in bushes and not homes occupied by people.

He added that he’ll inform the chief and elders of Breman Asikuma to perform some rituals before they can burn the python.