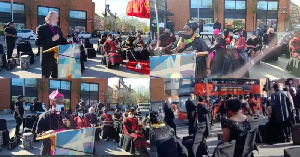 While the funeral ceremony for the late Duke of Edinburgh, Prince Philip, was going on, some Ghanaians based in the United Kingdom also held a funeral in memory of the late consort.

The memorial was held in Tottenham, London and in attendance were a number of members of Ghanaians in the diaspora clad in black for the outdoor ceremony.

Sounds from the Fontomfrom drums accompanied by the kete and adowa dance moves showing the rich Ghanaian culture filled the venue. Passersby couldn’t help but take videos and pictures to capture the moment.

Most messages and tributes during the funeral were delivered in Twi and translated into English for those who doesn’t understand the Ghanaian language.

According to one of the organisers, the funeral was being held due to the long-standing association Ghana has with the UK. He added that but for the restrictions on social gatherings, their funeral for the late Duke of Edinburgh would have been held at the venue of the main ceremony.

The Duke of Edinburgh died at the age of 99 on April 9. He was a member of the British royal family as the husband of Queen Elizabeth II.

He was interred in the Royal Vault at St George’s Chapel at Windsor Castle after a 50-minute service attended by just 30 guests.

Philip, described by royals as “the grandfather of the nation”, was Britain’s longest-serving royal consort and was married to the queen for 73 years.