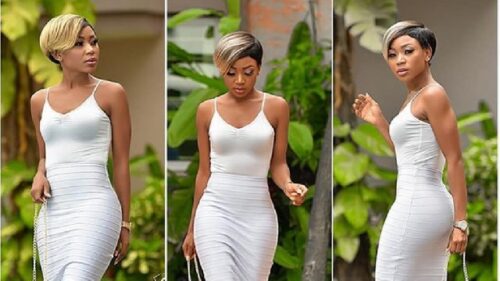 Speaking to Nana Romeo on Accra100.5FM’s mid-morning show, ‘Ayekoo Ayekoo’ on 16 April 2021, shortly after the socialite was sentenced to a 90-day jail term for posting a nude picture of hers with her son, Nana Yirenkyi l stated: “She is not an Akuapem native”.

“I’m not saying this because of the situation she is in now. She is human. She is a Ghanaian, so, we’re concerned. We shouldn’t defend only people from our hometown”.

He continued: “I once raised issues about how the lady was attaching our name to her brand. Somewhere last year, she looked for my number and got in touch. I must honestly say she looks really innocent”, the chief observed.

He said: “She came to request to see the queens and queen mothers of the land and the chief but she left and never returned”.

“Our only concern is the usage of our name,” he complained.

In his view, “if she uses it in a good way, it’s not a problem because she might be fascinated with the name” but added: “According to her, she has lived here in Akuapem before but it doesn’t mean that you’re from Akuapem”.

The chief said in his interaction with her, she could not specifically point out where exactly in Akuapem State she is from.

He, however, opined that the court could have pardoned her because of her son, “but the court has decided and I can’t do anything about it.

“This should serve as a deterrent to the others,” he added.

Akuapem Poloo posted the picture on Instagram in June last year on the occasion of her son’s seventh birthday.

She pleaded guilty to all three charges levelled against her.

The ‘Sexy Poloo’ singer was slapped with three charges of “publication of obscene materials, engaging in domestic violence, conduct that in any way undermines another person’s privacy or integrity and engaging in domestic violence namely conduct that in any way detracts or is likely to detract from another person’s dignity and worth as a human being”.

She was sentenced to 90 days on each count but the court said the sentence must run concurrently.

This implies that she will only serve a 90-day jail term.

The court, presided over by Christiana Cann, deferred the actress’ sentencing to today, April 16, 2021, to enable her to undergo a pregnancy test.

This is a requirement by law, to ensure she was not pregnant before her sentencing is passed.

Before her sentencing, the presiding judge confirmed that the actress was not pregnant after her test came out negative.