Home / GENERAL NEWS / SAD VIDEO: Father Of ‘Mona Mobl3’ Narrates How His Son Ended Up On The Streets 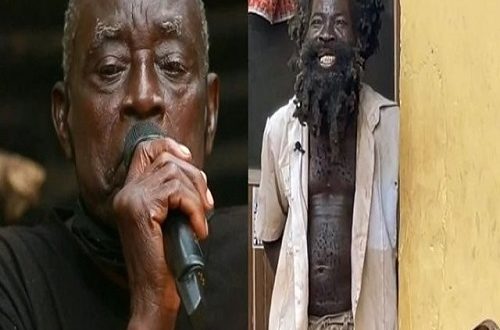 The parent of celebrity madman, Mona Mobl3 whose real name is Kofi Ampofo has narrated how he ended up on the streets.

The eighty (80) year old father, Papa Yaw Mensah who broke out in tears whilst narrating the story of his son indicated that ‘Mona Mobl3’ is his first son. According to him, his son was very brilliant in school but the situation changed along the way.

“You will never understand how he got mad. He was very healthy during his school days. It started in form two when he was preaching the gospel but the communication was not so clear. As time goes on, I realized his behavior was getting out of hand. A clear indication that he was mad, then he moved outside to the streets”. Papa Yaw Mensah noted.

Papa Yaw Mensah adds that his son sometimes acts normal. He says his son, in his current state, and sells to sane persons.

“He has a lot of sense. He deals in the retail of used goods. He buys and sells to those who are even sane. He also begs for money on the street. We sometimes clear his beard for him but he has a lot of hair”. He narrated in an interview with Kofi Adoma Nwanwani.

He further added that the condition of his son can largely be attributed to the smoking of marijuana.

“I have eleven children and he is the firstborn. He was born in 1969. He is very intelligent, but he has been smoking marijuana, that’s his main problem. He is unable to stop, he takes heavy roles of weeds and becomes very happy whenever he smokes. I took him to Ankaful, they tested him and the Doctor asked all the necessary questions and he passed. So the doctor discharged him. He even promises to stop smoking. He threw away all the medicines the doctor gave him because he says he is not a mad man”. He noted.

Akua Mansah, the mother of ‘Mona mobl3’ appealed to the public for assistance.

Previous Alleged wife killer case: Court to rule on accused bail on April 20
Next 6 Killed in ghastly Sprinter accident at Obretema, Near Suhum