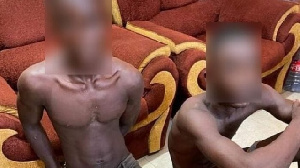 The two teenagers who allegedly murdered their friend for money rituals in Kasoa requested for ‘pocket no dry’ charm, Charity Mensah, the fetish priestess on whose orders the boys ostensibly carried out the act has disclosed.

A report by Citi News on the interrogation of Charity Mensah who was arrested earlier this week indicates details of phone conversations between the priestess and the two boys.

According to the news portal, Charity who was arrested with her errand boy Desmond Nii Adjei acceded to the request by the two teenagers.

She is however yet to confirm claims by the boys that she requested them to present a deceased person for the rituals.

“What they [teenagers] wanted was “pocket no dry” charm so that they will never lack money in their lives,” Charity Mensah is quoted to have said during interrogations.

The two teenagers who are still in police cells for allegedly murdering an 11-year-old boy asserted that the priestess was in the know of their actions. They allege that the priestess had promised to visit the place at night and retrieve the body of the murdered boy to complete the rituals.

Charity Mensah has been granted bail but reports indicate her husband has fled with their 2-week-old baby.