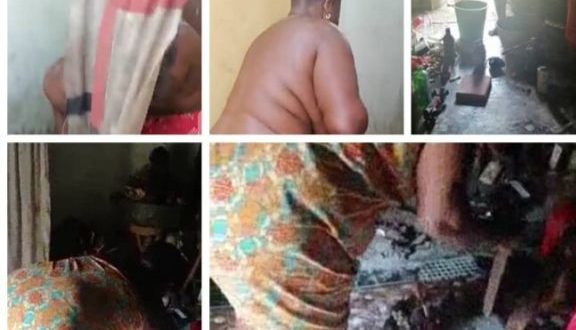 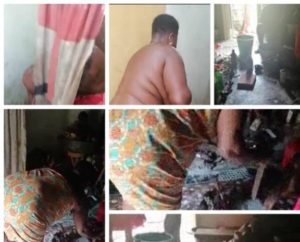 A fetish priest has allegedly leaked nude videos of a woman who visited his shrine to kill persons behind the enstoolment of the new Okuapehene.

The videos captured the woman – Attaa Magali chanting to kill President Akufo-Addo, Okuapemhene Oseadeyo Kwasi Akufo II, Victor Newman a presidential staffer now deceased, and other persons who supported what she calls the illegal enstoolment of the current Okuapehene.

The woman claimed he is sister to Odehye Kwasi Akufo – a candidate who was also wrestling the Okuapehene stool.

In one of the videos leaked from the shrine of Torgbe Shitor a fetish Priest operating in Akyem Kukurantumi of the Eastern Region, the woman in a piece of cloth around her waist incanting to the gods that “agoo agoo, nananom it is me Attaa sister to Kwasi Akufo who is being denied the Okuapehene stool. I am the one putting this photo into the coffin. Anyone who is part of this grand scheme from the family must be killed and summoned to the wilderness to answer”. [Fetish priest interrupts], drives away someone who accompanied the woman. The fetish priest asked the woman to touch an amount of money she was holding on her heart area and drop it on the god.

“Madam listen very well, the stool must be left to be where it is, this is what the god is saying. It is going to sit on it to work, therefore anyone who sits on it will be cleared by the god.”

The spiritualist took the woman to another room where he made incantations for minutes and gave her a knife to stab a photo believed to be that of new Okuapenhene Oseadeyo Kwasi Akuffo II multiple times while enchanting on the photo to hand over the stool to odehye Kwasi Akufo.

The woman is seen in another video leaked by the fetish priest, being asked to undress in front of him and make incantation over a concoction prepared in a bucket and mention the names of persons who are working against Odehye Kwasi Akufo and his family.

“Those who have tied our souls in the middle of the Akropong so that we don’t get the support of the subjects must be dealt with -Sammy Mfum, Nana Ofei, Baamuhene, Victor Newman, President Akufo Addo are all included. Nananom deal with them and also protect our family. Now, I bath this concoction to cancel any death on our family and send it back to them “.

In another leaked video, the woman was sent naked to an open bathhouse where another shrine is located. The woman was directed by the fetish priest to bath the liquid concoction put in a locally weaved basket and chant for goodwill upon her brother Odehye Kwasi Akuffo but wish evil for his opponents including President Akufo Addo.

The fetish priest then makes final incantation while filming the nakedness of the woman.
He asked the woman to fill a plastic bottle with the concoction and take it away together with an egg to give to Odehye Kwasi Akufo for similar incantation.

The video is believed to have been taken during the heat of the Akropong Chieftaincy dispute last year.

The new Okuapemhene was enstooled and outdoored on Sunday, May 3, 2020.

Odehye Kwadwo Kesse, 34, was given the stool name Oseadeeyo Kwasi Akuffo II.
He becomes the ninth Chief to ascend the Ofori Kuma Stool.

It was the turn of the Sakyeabea ruling house to select a candidate to be installed as Okuapehene to ascend the Ofori Kuma Stool which became vacant for almost five years after the demise of Oseadeeyo Addo Dankwah III, Okuapemhene who reigned for 41 years due to dispute in the family.

In 2017, while Odehye Kwasi Akuffo was nominated by the Paramount Queen mother -Nana Afua Nketia Obuo and began processes to install him as successor to the late Okuapehene, the Abrewatia of Sakyeabea Royal family also nominated Odehye Kwadwo Kese for the same stool.

Lilian Nana Agyemang who is the Abrewatia of the Sakyeabea Royal family petitioned the Regional House Chiefs challenging the traditional capacity of the Paramount Queen mother in nominating and installing Odehye Kwasi Akuffo to ascend the stool.

Following the nullification of nomination and enstoolment processes of Odehye Kwasi Akuffo by the Judicial Committee of the Eastern Regional House of Chiefs on Thursday, April 30, 2020.

Delivering the judgment Thursday, April 30, 2020, the Eastern Regional House of Chief upheld that, selection of a legible royal to be enstooled as Paramount Chief is the prerogative of the Abrewatia of the ruling family whose turn it is to select a candidate and submit the name of the chosen royal to Asonahene to be sent to the Queen mother.

The House upheld that the Queen mother failed to provide evidence that the right traditional procedures were followed before initiating processes to install Odehye Kwasi Akuffo as Okuapemhene.

The House also stated that, the Queen mother alone cannot select a candidate from the Royal Family without the involvement of the Abrewatia, adding that, the involvement of the Abrewatia and the elderly female is an aged-custom which does not take away the powers of the Queen mother in presenting the candidate for final enstoolment, therefore declared that, the nomination and processes to install Odehye Kwasi Akuffo is null and void with no traditional effect hence should not parade himself as Okuapehene.

The house directed that due traditional processes must hence be followed in enstooling a successor.

The Regional House of Chiefs awarded Ghc25,000 cost against the Queen mother.

The Akropong Chieftaincy dispute is however still ragging on in court as the queen mother and odehye Kwasi Akufo family are still in court pursuing justice.