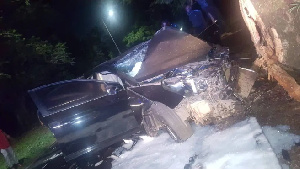 KNUST: Claims that students in car crash were drunk not verified – PRO

The Public Relations Officer (PRO), for the Kwame Nkrumah University of Science and Technology (KNUST), Daniel Norris Bekoe, has said claims that students involved in the car crash were drunk cannot be ascertained.

Two students died in an accident in Kwame Nkrumah University of Technology (KNUST) on Saturday, March 27, 2021 after a driver of a private saloon car which was negotiating a sharp curve accidentally veered off and ran into a huge tree.

One of the students, who is said to have been in his final year as a medical student, is the son of the Nalerigu-Gambaga MP, Alhaji Seidu Issifu Baba.

The three others suffered severe injuries and are receiving treatment at the Okomfo Anokye Teaching Hospital.

After the accident, there have been reports that the students in the vehicle who were involved in the accident were drunk and were returning from a club in town.

But reacting to the claims on Atinka FM’s AM Drive with host Kaakyire Ofori Ayim, PRO for the KNUST, Daniel Norris Bekoe, explained said the school cannot deny or confirm the claims.

According to him, the Police were contacted to come to the scene when the accident was reported.

He called on the general public to desist from speculations and wait for the official report from the school.

“We cannot confirm whether or not the students were indeed drunk before the accident. The police report will come out with the cause of the accident,” he added.

Another student also died in KNUST after he fell off a staircase in Unity Hall in the University.