Home / GENERAL NEWS / An open letter or memo to the Member of Parliament for Trobu Constituency Mr Moses Anim! 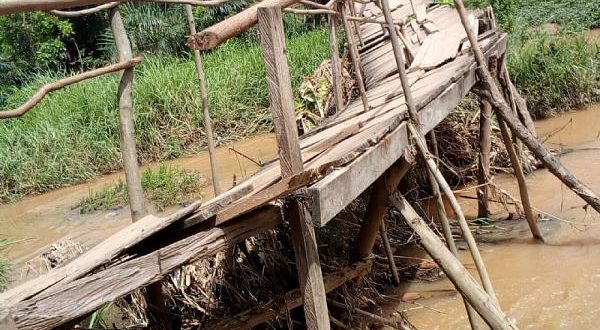 An open letter or memo to the Member of Parliament for Trobu Constituency Mr Moses Anim! 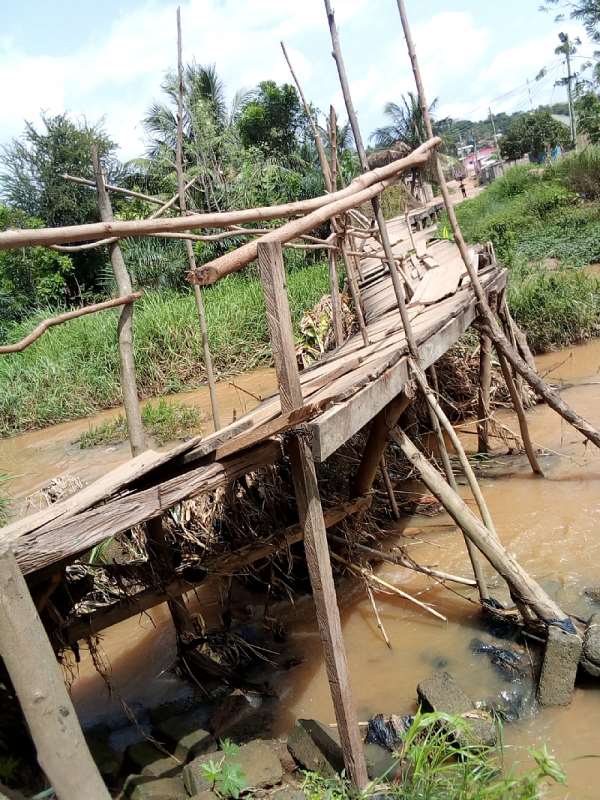 The picture attached to this article is a precarious bridge almost at the point of collapse. It is situated at a place called Abensu-Quarters, adjoining to Pokuase. The bridge links Abensu to Teacher-Korpe, and then to Pokuase. This bridge is used by School children from Abensu who attend Pokuase DA cluster of Schools. It is also used by residents in Abensu and surrounding areas during morning rush hour commute to work and back home in the evening. Hundreds of people use this bridge daily.

Abensu-Quarters is the original/initial home of residence of Mr Moses Anim, MP for the area (Trobu constituency). But as is the case of our Politicians, once they win elections and become MPs, they then acquire houses in affluent areas of East Legon, Cantonment etc.

I went to visit my mum who lives in the area. On approach to the bridge, I got scared and decided to survey it properly before I walk on it. In the course of my survey, I began snapping pictures of the bridge. A man then came from the opposite direction (Teacher-Korpe) and walked on the bridge towards me.

When the man finished crossing the bridge, he asked me who I am, and why I was taking pictures of their bridge. I told him I’m an Author/Writer, a journalist for that matter; and that I can’t believe people are walking on this bridge every day, especially school children.

The man shook his head, gazed at me for a while and murmured “hmmm!” I then asked him: “What’s the matter, Sir? He paused for a while, cleared his throat and said he’ll tell me a story about this bridge few years ago. The man is a trained Teacher with the Ghana Education Service (GES); and uses the bridge every day to and fro School (work).

He said there is a man by name Kampala, whose house is near the stream/bridge. And that every time the bridge collapses (breakdown) and school children fall into the stream and start shouting, Kampala is the one who had to ran and rescue the children.

Apparently, the last time the bridge collapsed and School children fell into the stream, after rescuing the children, Kampala decided to organize communal labour to repair the bridge.

Initially he was using his own money to buy boards, wood and nails for the repairs. As time went on, Kampala decided to put a bowl there, so that people could voluntarily drop some tokens into the bowl to assist with the repair work. The teacher said that, when he returned from work and saw what Kampala was doing, he was so impressed that he dropped Ghc 5 into the bowl. Next day when he went to school, he sought permission from his headmaster to absent himself from work the following day, so he could also join Kampala and others with the communal labour in fixing the bridge.

Sadly however, the communal effort by Kampala ended on a sad note when the MP for the area Mr Moses Anim came and stopped the work, and threatened to call Police to arrest Kampala because he didn’t have authorisation to do what he was doing. The teacher also told me how the MP’s driver by name Solo came and insulted him (the teacher) and others.

I became keenly interested in the story, and decided to do a bit of journalism work – my childhood career passion that never became a reality. So I went to Kampala to get the fact of the story, so I could do a write-up on it.

This is the account of the incidence, as narrated to me by Kampala, as it happened in the year 2017. Kampala, in his own words:

One day, about 3 pm, I saw School children passing in front of my house to cross the bridge to Abensu, as always. Not long after, I started hearing shouts of “mi wu ooo, mi wu ooo” meaning I’m dying ooo, I’m dying ooo! I ran to the bridge, and there lies two children in the stream. The middle of the bridge had collapsed, and the children fell through.

Right after rescuing the two children, my neighbour and I went to the MP’s house to report the matter to him. We met Mrs Anim who told us that her husband was not around. From the MP’s house, we went to Mr Abutu (then Assemblyman for Abensu, now deceased). We met the late Abutu and narrated the incidence to him. The late Abutu then told us that, if there was something we could do in the meantime, so that people could cross to either side, we should go ahead and do so.

My neighbour and I decided to quickly do a communal labour and do something for our people. About 3 of us contributed boards, wood and nails and with the assistance of some carpenters in the area, we managed to improvise a small size bridge for the people to use.

The late Abutu (Assemblyman) came to the site of the incidence, and saw us working. He then told us that he was going to Amasaman Assembly to report the incidence to NADMO. He also told us to record all our expenses, so that when the Assembly or Government step in, our expenses could be refunded to us.

Knowing very well that government coming to our aid might take forever or never, we decided to put a bowl there for people to voluntarily contribute some money (tokens) towards the repair works that we had started doing. And truly, people were happily and voluntarily donating for the work.

On our 3rd or 4th day of working on the bridge, I went to look for some more labourers to come and assist us lift the beams that had fallen into the stream. On my return, I saw Mr Moses Anim our MP on the other side of the bridge (Abensu side). As soon as I came, people started telling the MP “here is the man doing the job.”

Mr Moses Anim then put the question to me; “Who authorised you to do this job?” He also asked me who I’ll be rendering account of the monies I was collecting to! I told Mr Moses Anim that, this is what they Politicians do to us. After voting for them, they abandon us. And that this bridge has been in a deteriorating state for a long time, but he never cared.

So our repair work ended there. A month or so later, I saw our MP’s driver Solo brought some boards, wood and carpenters to come and adjust the bridge.

Well, here ends the sad experience of Kampala, as he narrated. He has learnt his bitter lesson. Next time he hears the shouts “mi wu ooo, mi wu ooo,” he won’t dare go and risk his life at the expense of other people’s children, only to be later threatened with Police arrest.

The picture as you see; is the current state of the bridge as at today. Over to you now, Mr Moses Anim! This is a bridge you know so well and very much aware of.

How on earth we got ourselves into this tribal kind of partisan politics, that even when there is glaring evidence to the fact that a person or a party has not performed creditably, we’ll still vote for such person or party due to tribal or ethnic orientations; that is one of our biggest undoing as a people.

Till the day we all, or majority of us purge our minds off such blind and unwholesome allegiance or partisanship, our country has no future! We’ll continue in this our “Animal Farm” and “Comedy of Errors” till the Chinese colonise us after the British! And the era of the Chinese colonialism will be far worse than that of the British, because the Chinese would have bought all our lands and resources from our corrupt political leaders before they start the colonisation, as is clearly happening! The Chinese don’t even treat us (Blacks) like human beings in their country! We all saw what they did to our fellow Africans in China during the outbreak of covid-19.

Well, there we go. This is the state we are in as a nation and a people. Politics had done us more harm than good. The whole concept of African politics is to enrich a few at the expense of the masses.

Mr Moses Anim, our President Nana Addo is being highly praised for developing and beautifying Kyebi, so much that even the street to the public toilet is as fine as Buckingham Palace Street! And as we all know, Nima too saw a facelift when the old neighbours of President Nana Addo were relocated. I think Nima’s facelift was the venue for the re-election victory. Clearly, Nana Addo has left indelible footprints at the places of his abode before election as President. Please Mr Anim, if I may ask; what indelible footprints are you leaving in Abensu? I learnt you now reside in East Legon, as is the norm in our politics.

Well, I think I’ve got to give you credit for the on-going road construction works from Abensu junction to the township. Although I don’t know whose initiative that is, I’m pretty sure you won’t have permitted it if it isn’t yours, as happened with the bridge the last time.

Mr Moses Anim, please pardon me for not addressing you as “Honourable.” I personally think that only a minute fraction of our Politicians deserve that title. Unless we agree that “Honourable” is a catch-phrase or euphemism for corruption, parochial interest seeking and self-aggrandisement at the mercy of the masses. Hopefully, when the lives of those school children in your native town of Abensu are safeguarded from the dangerous bridge, maybe I can write you a thank you letter, and address you appropriately in that letter.

Mr Moses Anim, I’m sure your excuse for this bridge would have been “it’s not my party in power.” But it’s your party in power, so what would your excuse be now? And please, may I please humbly plead with you to kindly caution your driver to be weary of his tongue, as he went about insulting people in the community in your name and power! Just so he knows; power won’t be with you forever!

May God save our Homeland Ghana! For the masses, our hope is in GOD – our REDEEMER!

I am a Citizen, NOT a Spectator!

(Author/Writer; a resident of Trobu constituency).