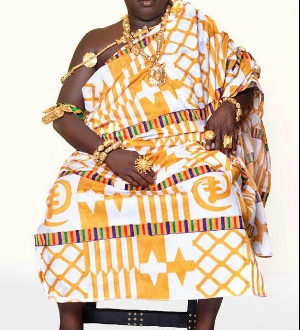 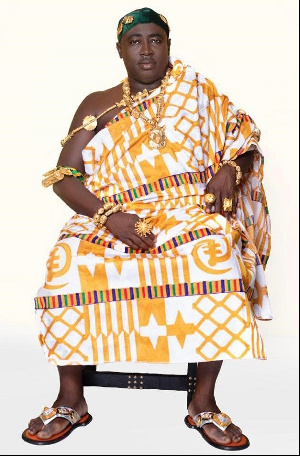 Entrepreneur and Chief Executive Officer of upstream and downstream oil and gas services firm Brogya Resources Limited, Carl Brogya-Sarpong, has been enstooled as the Dompeahene of Agogo Traditional Area in the Asante Akim North District of the Ashanti Region.

He will bear the stool name Dompeahene Nana Bediako Brogya Sarpong, an honorary chieftaincy title conferred on him by his grandfather, Nana Kwame Akuoko Sarpong – the Omanhene of Agogo Traditional Area, in recognition of his hardwork and diligent service to both the paramountcy and the people of Agogo.

The title “Dompea” means someone who pushes crowds into betterment and prosperity, who pulls home influential people, projects and investments or any trailblazing force leading the crowds towards development.

In his new role, the astute businessman is expected to leverage his entrepreneurial acumen, contacts and goodwill to attract the right investments that will help accelerate further development of the Agogo Township.

In an interview with journalists after his swearing-in ceremony that was graced from several prominent people in business and politics, he said: “This is an honour done me by my grandfather who has also been my role model since infancy. I, in turn, shall also aim to serve as a role model to the youth of Agogo and to serve the community as well as they deserve.

I seek to blend my exposure as a banker, scholar and an entrepreneur with traditional norms to bring home business partners and investors and to put Agogo on the global landscape.”

Nana Brogya Sarpong indicated that Agogo offers numerous opportunities for investors seeking to go into agribusiness with the town noted for the production of plantain, cashew, watermelon, tomatoes, teak, etc.

He also hinted that discussions with potential investors are far advanced to construct a modern stadium facility that will be sited on a 300-acre land demarcated by the Omanhene for the youth of the town.

He added: “We expect the people of Agogo to come along with us [chiefs] on this development journey and much would also be expected from our leadership approach. I believe I would come across to the people as a humble and kind-hearted person and that would make smooth the work we are going to do with them to deliver and to even exceed expectation,” he assured.

Omanhene Nana Akuoko Sarpong commended the newly-enstooled chief for his dedication and commitment to the betterment of Agogo and admonished him to follow the good path of his uncle Okyiridomhene Nana Abrantie Amakye Dede, his deceased predecessor Dompeahene (Patricia Newton) and other chiefs of the area to bring development to the Agogo community.

“You have been a grandchild dear to my heart and have demonstrated courage, leadership and a lot of promise as I watched you grow into the man you are today. As you take up this stool, be mindful that the Agogo Township needs investors and partners to further advance the development frontiers charted by your forefathers.

I also entreat you to continue in the good path of your uncle Abrantie Amakye Dede since his enstoolment as the Okyiridomhene and bring honour to the paramountcy,” he concluded.

On his part, Okyiridomhene Abrantie Amakye Dede expressed delight in the enstoolment of his esteemed nephew: “This Dompeahene is my nephew and if something as big as this is coming into our family, it is imperative I am here to offer my support to him to swear the oath of allegiance to the Omanhene Nana Akuoko Sarpong. My expectation is for him to pull all the educated youth of Agogo both in Ghana and in the diaspora back home to support the development agenda we have for our people.”