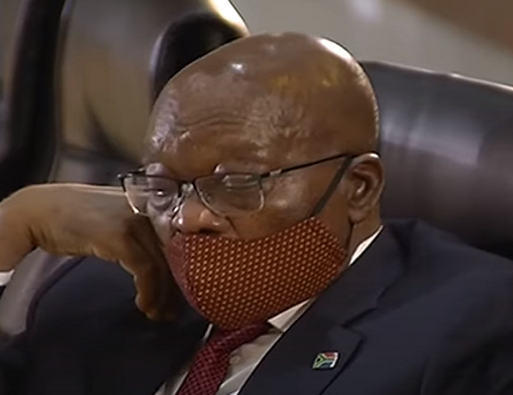 The Judicial Commission of Inquiry into Allegations of State Capture is once again heading to the  Constitutional Court on Thursday to seek an order for former President Jacob Zuma to be arrested.

Zuma has steadfastly refused to appear before the Commission, accusing its presiding officer Deputy Chief Justice Raymond Zondo of bias.

Earlier Zuma ignored the Constitutional Court judgment, compelling him to appear before the commission. The commission has applied to the apex court to have Zuma jailed for two years.

“Mr Zuma has left I have been told. Mr Zuma had been issued with a summons to be here from Monday to tomorrow unless he was excused by me he has left today without asking me to be excused.”

Zondo was visibly irked and disappointed at Zuma’s decision to walk out of the commission without permission.

The running battles between the two have been raging for some time and after a number of attempts to have Zuma appear before the commission failed and with the Constitutional Court order not even serving as a deterrent, Deputy Chief Justice Zondo was left with no option but to apply to have Zuma held in contempt of court.

Zondo seems unrelenting in his action against Zuma for not respecting the commission and the highest court in the land.

“The commission will make an application to the ConCourt which is the court that made the order that Mr Zuma has defied and seek an order that Mr Zuma is incompetent of court. Then if the court reaches that conclusion it can impose a term of imprisonment on Mr Zuma or impose a fine. The commission will approach the Concourt to impose a term of imprisonment if he is found guilty but it will be up to the court to find what is appropriate.”

However, Zuma is unfazed. In his response, he wrote a letter to the Constitutional Court saying he will not participate in any legal proceedings instituted against him by the commission.

He has also ignored the deadline to file responding affidavits on the application for his imminent arrest. His only reason for not co-operating with the commission is that its presiding officer Deputy Chief Justice Zondo is biased.

“I am like someone who some people think I am –  an intransigent person. Because I am breaking the law. I will have an opportunity to clarify to you today what led to me, taking a decision that I am not going to the commission. They said I just woke up and took a decision that I am not going to the commission. I said ‘I don’t want to appear before the chair because he’s biased.’ I have never refused to go to the commission despite now there is a ruling forcing me to do so. I don’t want you to leave not knowing the truth, they have touched my rights and I can’t respect a judge for doing that. They must respect themselves first.”

Zuma has vowed not to appear before the Commission if Deputy Chief Justice Raymond Zondo does not recuse himself. He said he believes that there is a level of bias against him and a lack of impartiality.

As in the past, where the Commission and the Constitutional Court ruled on Zuma in absentia, it seems likely that even on Thursday when his possible arrest is discussed and decided, he will not be present.

Reaction to Zondo’s application to get Zuma arrested:

VIDEO: Meet the pastor who farts on the faces of church members during deliverance