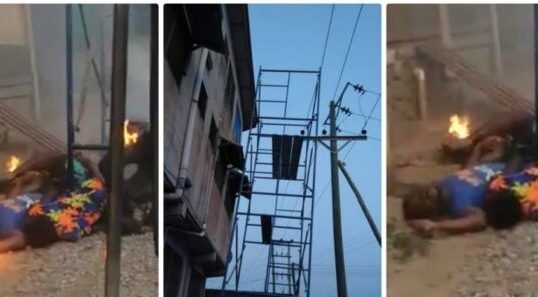 Report convened has it that four people have been electrocuted at Anwomaso Bebre near Ejisu in the Ashanti Region of Ghana, leaving them lifeless.

Anwomaso Bebre in the Oforikrom Municipality in Kumasi was thrown into the state of shock and mourning after four people got electrocuted.

The four people, which included a father and son, a carpenter and another person, were said to be fixing mosquito nets in the windows of a two-storey building when calamity struck.

According to eyewitnesses, the four people were pushing a metal scaffold to another window when it (scaffold) accidentally touched electricity power lines.

Within seconds, all the four people pushing the metal scaffold got electrocuted as people at the scene ran helter-skelter in order to save their lives.

The charred remains of the four have since been deposited at the Komfo Anokye Teaching Hospital (KATH) morgue for autopsy.

Frank Frimpong, Assemblyman for Anwomaso Bebre, who was among the people that witnessed the gory spectacle, said the entire town was in mourning.

According to him, around 5:30pm on Sunday, a caretaker of the two-storey building, engaged the services of a carpenter to fix mosquito nets in the windows of the house.

The carpenter, identified by his ID card as John Abanga Anane, had successfully finished fixing one of the nets so he called for help to push the heavy scaffold to another window.

The assemblyman said the caretaker as well as a father and his son, offered to help the carpenter to push the scaffold but it accidentally touched the electricity power lines, leading to massive explosion and electrocution.

Mr. Frimpong said people at the scene saw the four being burnt but they could not do anything since they were afraid of being electrocuted as well.

According to him, officials of the Electricity Company of Ghana (ECG) were called to disconnect all power lines in Anwomaso Bebre before the bodies could be retrieved.

With the exception of the carpenter, who was identified by his ID card in his saloon car as John Abanga Anane, the names of the other three people were not immediately known to the paper.

Dead body wakes up while being prepared for burial