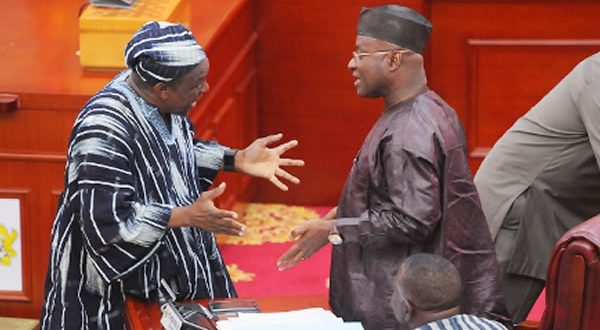 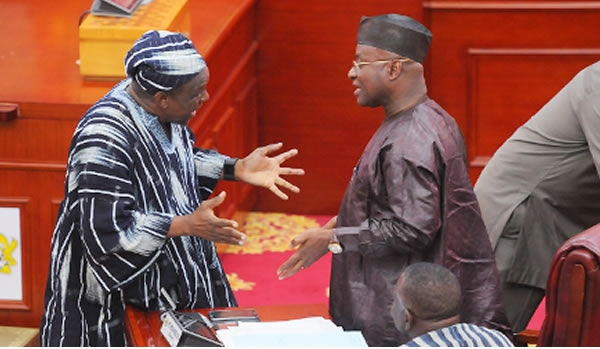 Mr Alban Bagbin has told Majority Leader Osei Kyei-Mensah-Bonsu that he (the Suame MP) had been his friend until he (Bagbin) became the Speaker of Parliament.

“Hon. Majority Leader, your powers have not reached that. Hon. Majority Leader, resume your seat. You don’t lead Parliament. You lead the business of the House. You lead the Majority and you lead government business. As to the role of Speaker, you’ve not been there yet. When you get there, you’ll do so,” Mr Bagbin told the Minister of Parliamentary Affairs on Tuesday, 23 March 2021 during parliamentary business regarding a petition filed by Dr Kwabena Duffuor and Mr Prince Kofi Amoabeng to have the house investigate the collapse by the government, of their banks – uniBank and UT Bank.

Mr Kyei-Mensah-Bonsu had raised issues with the Speaker’s referral of the petition laid by Bawku Central MP Mahama Ayariga, to a yet-to-be-composed seven-member committee for probe, since, according to the Majority Leader, the matter was already before a court.

The Suame MP did not take kindly to the Speaker’s overruling of his objections, which sparked a back-and-forth between the two politicians and friends.

Mr Kyei-Mensah-Bonsu insisted the Majority Leader is the leader of the House, to which Mr Bagbin retorted: “I stated it but you’re not the leader of the Speaker. At least, I have a position in Ghana. Number three”.

He also told Mr Kyei-Mensah-Bonsu that: “You’ve been my good friend from all these years until I became Speaker”, adding: “Everybody in Ghana was doubting whether, indeed, you were really my friend”.

“I’ve received a lot of calls about us and I said you’re my friend and you’re still my friend. Please don’t give credence to that,” the Speaker told Mr Kyei-Mensah-Bonsu.

Dr Duffuor, a former Governor of the Bank of Ghana and former Finance Minister; and Mr Amoabeng, founder of UT Bank, petitioned Parliament to have the licences of their banks, which were revoked in 2017 and 2018, restored.

They also want Parliament to investigate the conduct of the Bank of Ghana in carrying out the revocation of the licences.

Below are their reliefs:

i) Investigate the conduct of the Bank of Ghana and the Ghana Stock Exchange for the revocation of UT Bank’s licence and delisting the bank without due regard to the rules of Administrative Justice guaranteed under Article 23 of the 1992 Constitution.

ii) Direct the restoration of the banking licence of UT Bank Limited by the Bank of Ghana and the remedying of the harms done the shareholders’ property rights as a result of the conduct of the Bank of Ghana.

ii) Direct the restoration of the banking licence of uniBank Ghana Limited by the Bank of Ghana and the remedying of the harms done the shareholders’ property rights as a result of the conduct of the Bank of Ghana.

The Bank of Ghana (BoG) in August 2018 announced that it has revoked the licences of five banks and put them together as Consolidated Bank Ghana Limited.

Prior to the amalgamation of the five banks, the Central Bank had closed down UT Bank and Capital Bank in August 2017.

Reasons for closureuniBank, according to the BoG, was identified during the Asset Quality Review update in 2016 exercise to be significantly undercapitalised and beyond rehabilitation.

“Shareholders, related and connected parties had taken amounts totaling GH¢3.7 billion which were neither granted through the normal credit delivery process nor reported as part of the bank’s loan portfolio.

“In addition, amounts totaling GH¢1.6 billion had been granted to shareholders, related and connected parties in the form of loans and advances without due process and in breach of relevant provisions of Act 930.

“Altogether, shareholders, related and connected parties of uniBank had taken out an amount of GH¢5.3 billion from the bank, constituting 75 percent of total assets of the bank,” the Central Bank explained back in 2018.

On UT Bank, the Central Bank stated in a press release: “This action has become necessary due to severe impairment of their capital.”