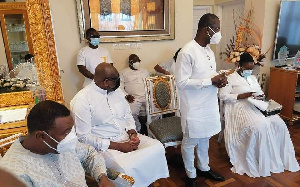 Celebrating the Executive Chairman and group CEO of the Jospong Group, Dr Joseph Siaw Agyepong who turned 50 over the weekend would have been incomplete without a part of his life story few people know about – his love life.

Mr Siaw Agyepong who is one of the few millionaires of Ghana, on the occasion of his 50th birthday revealed how supportive his wife Adelaide Siaw Agyepong has been over the years to him.

Dr. Siaw Agyepong revealed that life was so hard for him at the time as a young man in love that he had to look for means to be able to meet his darling and propose to her.

He revealed that he had to borrow a bicycle from a friend in order to go and propose to Adelaide, his one and only wife.

“In those times, owning a bicycle was a huge luxury that only a few could afford”.

Dr Siaw Agyepong made this disclosure during his 50th birthday prayer party – a party without music and dancing, just prayer.

According to Nathaniel Attoh who was MC for the birthday prayer party event, Dr Siaw Agyepong hardly wanted a party or anything of the sort to mark the milestone but his wife Adelaide and her team put the surprise together.

Present at the party were Archbishop Nicholas Duncan-Williams, Apostle Professor Opoku Nyinah, immediate past Chairman of the Pentecostal Church of Ghana and Dr Lawrence Tetteh of the World Miracle Outreach, who prayed and share words of exaltation while the Present King Choir added a flavour of choral Music.

3 burnt to death on Spintex road