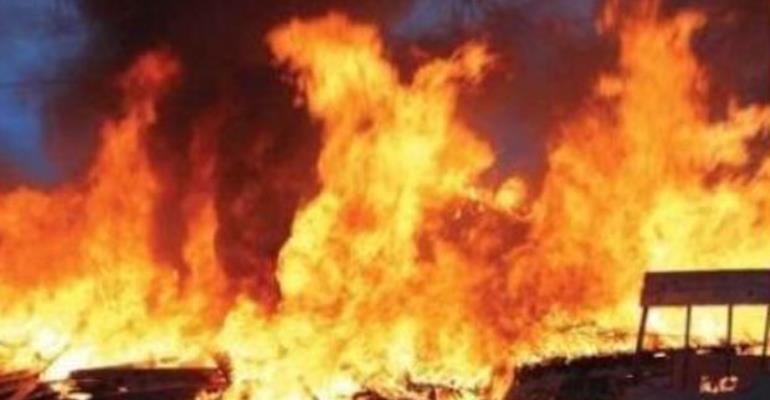 Three persons have reportedly burnt to death in a fatal accident at Okpoi-Gonno on the Spintex Road in Accra.

The deceased, yet to be identified, were among a group of four persons aboard a Mercedes Benz car. The car in which they were driving caught fire after running into some stationary vehicles that had also been involved in an earlier accident on the same road.

According to reports, the driver of the Benz car had earlier been signaled to stop, by police personnel and personnel from the National Road Safety Authority who were engaged in working to clear the road. The driver and occupants of the car had refused to heed the caution and had ended up running the vehicle into one of the accident-vehicles. The car caught fire instantly.

“Two persons were rescued in the said accident but the other three occupants got burnt in the car,” DSP Efia Tenge, the Accra Regional Police Public Relations Officer said, and added that the accident occurred at about 12:20pm on Saturday.

“Our investigation revealed that the driver, Cyril, was driving the DAF truck with registration from Manet Junction towards the Palace Mall area. The DAF truck was loaded with a 20-foot container. Upon reaching a spot near Fashion City Furniture, Lartey ran into a Nissan 4×4 estate saloon car and a Spark saloon car which were coming from the opposite direction, causing damage to the said vehicles,” it said.

DSP Tenge continued saying that the driver lost control of the vehicle, causing the 20-foot container to fall onto the middle of the road. While the police were directing traffic and the road safety recovery truck was about to move the container from the road, the driver in charge of the Mercedes Benz saloon car with an unknown number-plate and with five persons on board, ignored all warnings given him and crashed into the container.

“The Mercedes Benz caught fire in the process and with the assistance of the fire service personnel, the police managed to rescue the driver and a passenger,” adding however that “three occupants in the vehicle who could not be immediately removed got burnt beyond recognition.

“The bodies of deceased persons have been deposited at the Police Hospital morgue for identification and autopsy, while the two persons rescued earlier were rushed to LEKMA Hospital for treatment.”

11-year-old girl missing after being accused of stealing GHC20