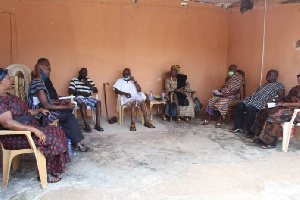 Tension is brewing in Akropong-Akuapem in the Eastern Region over stolen traditional black stool by unidentified armed men.

The stool which belongs to the Oyoko royal family was stolen by knife and gun-wielding men at night.

The incident has been reported to the Akropong police but no arrest has been made, neither has the stool been found.

The incident comes at the back of claims by the acting Abusuapanyin Adu Debrah that he has destooled the Queen-mother of the royal family (Akuapem -Oyokohemaa) Nana Adwoa Pokua II.

“I was informed that the traditional stool has been stolen by knife and gun-wielding men who scaled over the walls of the house and entered to steal the stool.I was told it was masterminded by Debrah side of the family. I think the stolen stool is in the house of one Ofei Awuku. We have reported the case at the Police station.”

“The Abusuapanyin is circulating letters that I have been destooled with no apparent reason,” Nana Adwoa Pokua II told the media Saturday, March 20, 2021.

At an emergency meeting held under a heavy private security guard on Saturday at Akropong, the overall head of Oyoko royal clan, Abusuapanyin Budu said Abusuapanyin Adu Debrah has no traditional authority to unilaterally destool the Queen-mother.

He said his decision amounts to illegality hence summoned to a meeting at Akwamufie.

“I am the Head of Oyoko clan at Akwamufie and also the overall Head of all the six Oyoko in Abomosu, Kwahu, Anum, Akropong, Akwamu and Anlo Today’s meeting concluded that we are going to have a larger meeting at Akwamufie to invite the Abusuapanyin over this confusion. We have summoned him over the said letter he authored claiming he has destooled the Queen-mother”.