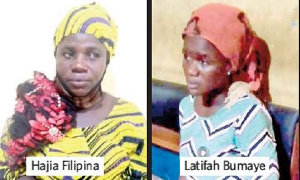 One of two female suspects being tried for allegedly instigating the gruesome murder of Akua Denteh, a 90-year-old woman in Kafaba, Savannah Region, over claims of witchcraft, has applied to the Tamale High Court for bail.

Sherina Mohammed, aka Hajia Filipina, aged 40, according to a Daily Guide report sighted by GhanaWeb has reported to the court that she is pregnant and therefore must be granted bail on health grounds.

The suspect has been in custody for about eight months following her arrest in July 2020, and the proof of when and how she became pregnant will predictably be a matter of huge public interest.

However, according to Daily Guide, the pregnancy issue initially came up on February 22, during the case management before the trial, upon which the court made an order for a pregnancy test to be conducted on March 16.

Francis Ayamwuni Asobayire, the State Attorney prosecuting the case objected to the application, arguing that there was no medical record to prove that the suspect was indeed pregnant.

The Tamale High Court 1 however decided in the “interest of justice” to order a pregnancy test so that it can make a determination on the bail request.

A state Attorney reportedly informed the Daily Guide that a determination on whether the suspect was pregnant or not was not going to affect the court process adding that the state had prepared a team of three attorneys to ensure the case is fast-tracked.

The prosecution has hinted it will be calling its witnesses on the next scheduled dates for sitting which will be March 29, and March 30.

Facts of the case

Hajia Filipina and one Latifah Bumeye a 25-year-old-trader believed to be an associate of the ringleader in the Akua Denteh murder lynching, have pleaded not guilty to charges of conspiracy, murder and trial by ordeal.

The prosecution has informed the court that the accused persons took the 90-year-old victim through unlawful trials which are against the laws of the country, by compelling her to drink a concoction to prove she was not a witch, thereby resulting in her death.

The incident took place in Kafaba in the East Gonja Municipality of the Savannah Region last year.

The gruesome killing of Madam Akua Denteh which was captured on video caused public outrage with several calls for legislation to protect old women against such similar treatments, especially in the northern parts of the country, where women, especially widows, are treated as witches.