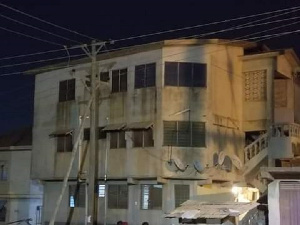 Four men were electrocuted Sunday at Anwomaso Bebre near Ejisu in the Ashanti Region, forcing authorities to cut the power supply in the area.

The victims –include a carpenter, a father and his son and one other –were said to have raised a scaffolding pole to begin work on a three-storey building.

A part of the metal accidentally touched power lines leading to the electrocution, witnesses say. The police and the fire services were later called to their rescue.

They were however confirmed dead at the scene.

Assemblyman for Anwomaso Bebre, Hon Frank Frimpong said the community is disturbed by the tragic incident.

“I got the information around 5:30 pm. So I quickly called the police and the fire service to the scene. We later gathered that the victims were fixing a net at the top floor of the building and so in an attempt to move the metal there was a contact with power lines and that led to the electrocution”, Frank narrated.

He continued, “So I called the police and the fire service to the scene. Some ECG officials also came to disconnect power supply to enable us convey the bodies to the morgue. It was a horrifying scene if you ask me”.

Frimpong said three of the victims have been identified by their families. He added the police have officially taken statements from witnesses as part of their investigations.

The charred bodies have since been deposited at the Komfo Anokye Teaching Hospital for preservation, the Assemblyman indicated.