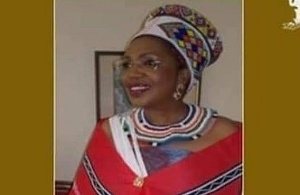 South Africa’s powerful Zulu nation has a new ruler — for now, according to local media outlets.

eNCA quoted palace sources as confirming that Queen Mantfombi MaDlamini Zulu has been named as interim successor in the late King Goodwill Zwelithini’s will.

This is until the queen decides who will take over as Zulu monarch, the report added.

The sister of King Mswati the third, Queen MaDlamini married King Zwelithini in 1973.

The King was buried – in Zulu tradition ‘planted’ – on Thursday, March 18 after a colourful ceremony. The burial was a nighttime and men-only event according to Zulu tradition.

Why the Suri men of Ethiopia drink cow’s blood regularly

It’s official! SA has sold its batch of AstraZeneca vaccines to the AU — Mkhize