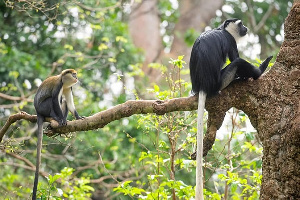 The story of monkeys living with the inhabitants of two twin communities in the Nkoranza North District, Boabeng and Fiema is not a fairy tale but a real story.

The two communities are home to two monkey species and over one thousand monkeys who are spread across a 4.5 kilometre square forest designated as a Sanctuary enjoying life in a natural environment.

The monkeys and the residents are neighbours in a symbiotic atmosphere with both species crossing each other on daily basis in pursuit of their livelihood without any problem.

Apart from the daily routine of visiting the communities at different times of the day for food and water without being harmed, the monkeys also have the privilege of getting befitting burials by the Fetish Priest of Daworo when they die at a Monkey Cemetery deep within the Sanctuary.

A visit to Boabeng by GhanaWeb’s Bono Regional Correspondent showed several monkeys who had trooped to the community in search of food.

The Chief of Boabeng and Vice Chairman of the Boabeng-Fiema Monkey Sanctuary, Nana Owusu Damoa Ameyaw III, describes this relationship as a tradition and the people will continue to preserve it.

Speaking on the history behind the practice, Nana Owusu Damoa Ameyaw III disclosed that the relationship with the monkeys has a traditional connotation which dates years back and no resident dares harm the animals as they are considered sacred.

“A hunter by name Nana Kwabena Amoah of Boabeng found the Fetish Daworo, in a mysterious place surrounded by two Mona Monkeys and Black and White Colobus monkeys.

Nana Kwabena Amoah brought the Fetish Daworo to the village of Boabeng and the four Monkeys followed suit”.

He added that based on the strange discovery, an oracle was consulted and it emerged that the monkeys were not ordinary monkeys but children of the Fetish Daworo and should not be harmed, an order that has religious been complied with up to date.

Isaac Sarkodie, one of the guides who took this reporter round the Monkey Sanctuary disclosed that the place harbours the Mona Monkeys and Black and White Colobus Monkeys who have distinct features but live together mutually.

The guide revealed that unlike the Black and White Colobus Monkeys, the Mona Monkeys visit the community early every morning for food.

He added that even though the monkeys live together, they live in colonies and have their own territories they aggressively protect. 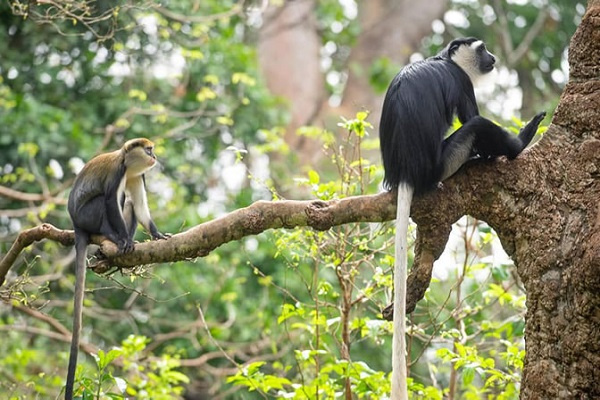 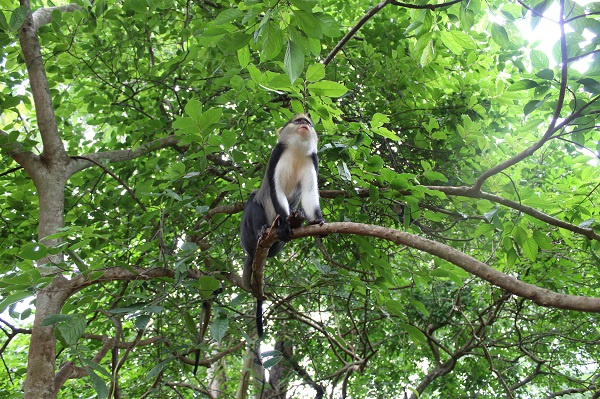