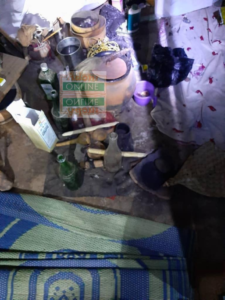 A 30-year-old man has been arrested over the murder of his friend at Nyakpala in the Northern Region.

The body of the deceased from Sierra Leone was dumped on the Tamale – Nyankpala road.

According to police report, on March 15, 2021, at about 2110hrs, the police had information that a suspect, Mohammed Hardi, a 55-year-old Mallam, had allegedly killed someone in his room at Gurugu, a suburb of Tamale.

Police patrol team quickly proceeded to the crime scene, searched his room but did not see the body.

The police, however, found ritual items in his rooms.

Later the same day at about 2210hrs, the police had another information that a body had been dumped on the Tamale – Nyankpala road.

The police rushed there and found a body of a man wearing only green boxer shorts lying on his left hand side dead.

The suspect later gave his name as Asedia from Sierra Leone. Inspection on the body revealed a small cut on the forehead. The body was taken to the Tamale Teaching Hospital where he was examined by Dr Dorrell and he confirmed him dead.

Police investigations revealed that, the deceased on March 12, 2021, visited his friends, Mohammed Hardi and Alfa Sakibu, both spiritualists in Tamale to assist him do money rituals.

The suspect told the police that on March 15, 2021, at 0930hrs, the deceased complained of body pains and died in his room.

For fear of being arrested by the police, Mohammed Hardi said they decided to dump the body at the road side.

Suspect Hardi, who has pleaded not guilty, is in police custody to reappear in court on Wednesday, March 17, 2021, while Mr Sakibu is on the run.

Meanwhile, the body has been deposited at the Tamale Teaching Hospital morgue.