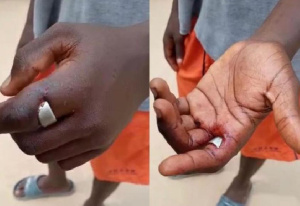 A 19-year-old boy, who lives at Kasoa Iron City in the Central Region is on the verge of losing his finger or his life for wearing his friend’s ring made for spiritual purposes.

But unknown to him [the victim], the ring was for spiritual purposes and should not come into contact with water.

All efforts to remove the ring has proved futile as half of the ring has been cut off with the remaining half remained stuck in the forefinger of the victim.

When contacted, the owner of the ring said he went for the ring from a spiritualist and was told not to allow water to touch the ring since it could come with consequences.

He disclosed that the only way the ring could be removed is for a baby to be sacrificed.

Some pastors and other spiritualists have attempted to remove the ring but failed.