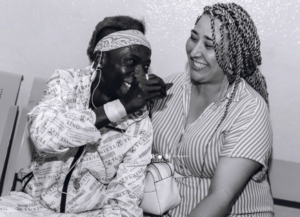 Patapaa‘s German wife, Liha Miller, is heartbroken over the death of a beloved.

Liha took to social media to break the news as she posted photos of a young man.

According to her, the deceased whose identity is not immediately known, is one of her boys in Agona Swedru of the Central region.

What may have caused the death of the young man is not immediately known.

Her post has garnered reactions with many fans and followers demanding the cause of death amid commiseration messages to Liha.

SCREENSHOT+VIDEO: Samini and Stonebwoy ‘DIRTY’ each other on Twitter again