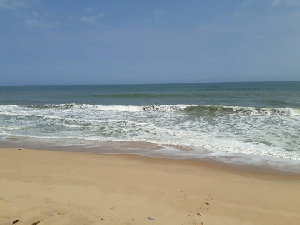 A mass burial is expected to take place for the 13 children who got drowned at the Apam beach in the Central Region on March 7.

So far the number of people found dead consist of 11 boys and two girls.

The District Chief Executive (DCE) of Gomoa West, Bismark Baisie Nkum announced to host of the 3FM Sunrise Morning show, Alfred Ocansey that a burial service would be held for the dead children tomorrow the 16th of March, 2021 after which a mass burial will follow immediately.

The Gomoa Akyempim Traditional Council consisting of fetish priests and priestesses and chiefs performed rituals on Sunday to appease the gods of Apam.

According to Mr. Nkum “ Our understanding from the Chief Fisherman and his elders is that this has stopped for some time and the children at the blind spot found a way in there. Indeed they indicated that where the children engaged in swimming activity is an area that normally they don’t allow people to go there because that is where their obosom Kese is.

“There is a family that has complained of a missing child and our thought is that this child might have been part of the children who went to the beach. What the family has not been able to confirm whether their son also went to the beach so we are assuming that once there is a missing child and we have this incident that child is part of that so plus or minus we are looking for one more”.

Rescuers are still searching for more bodies as 20 teenagers were reported drowned on that fateful Sunday.

“Infact I personally also questioned the youngmen and one of them gave an account that in their estimation they numbered about 15 and the second one also gave an estimate of 20 so we are working with 15 and 20 bodies so we are thinking that their account was not far from what we have done so far. So if you consider the fact that we have retrieved 15 bodies two alive then one more body is still being searched for what it means is that we are done and we are not expecting any more,” the DCE stated.

He however said family members should lodge a complaint with the police but was quick to say that so far apart from the one missing body, no family member has come forward to complain of the missing child.