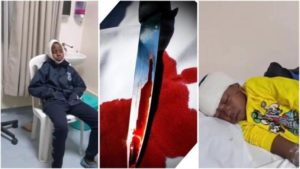 Two innocent kids aged below 10 years are lucky to be alive after they were stabbed by a rogue ex-house help in Nairobi’s Dohnholm estate.

According to the eldest son, their ex-house help who had left their home two months ago came back to their house unannounced when their parents were away and went straight to the kitchen, took a knife, and stabbed them before fleeing.

The kids were rescued by neighbours after they started screaming for help and rushed to a nearby hospital in Buru Buru, where they are currently receiving treatment.The suspect is still on the run.

According to the mother of the two innocent kids, the house help has been threatening her ever since she fired her.

She stabbed her kids to revenge after she was fired.

Here are videos of the kids in the hospital.

Nigerians are the greatest problem of Nigeria – Buhari’s top aide

Woman in court for breastfeeding snake