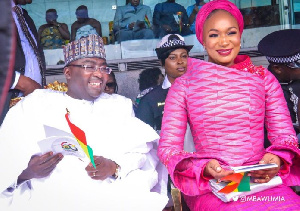 The Vice President had been accused of having another wife with stories popping up periodically.

Speaker of Parliament, Alban Bagbin, appeared to have given some credibility to the reports when he mistakenly referred to Samira Bawumia as Ramatu Bawumia during the investiture of President Akufo-Addo.

The Ramatu issue reared its head again during the State of the Nation’s Address when members of parliament chanted the name when Speaker of Parliament was acknowledging the presence of the wife of the Vice President.

The statement which is meant to put the Ramatu’s issue to rest, has generated conversation on social media with diverse opinions.

Whilst some believe that the Vice President is being candid, others suspect Dr Bawumia is not being forthright with issues.

Below are some tweets

I genuinely feel sad for Ramatu Bawumia. Politics aside, she could be your mum or a sister. @MBawumia thinks discarding her will save his presidential ambition. The Lord is a fair God

I don’t understand this oo,how will Bawumia accepting that he have another wife call Ramatu,affect his political ambitions.

Is he the first person to practice polygamy in Ghana?
Btw he is a Muslim!