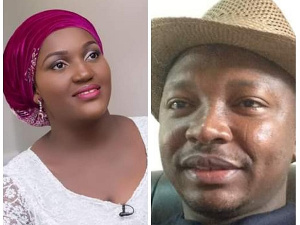 Former Member of Parliament for Kumbungu Ras Mubarak has denied allegations of assault and abuse made against him by his former wife, Rasheeda Adams, admitting that notwithstanding their challenges as a couple, they had a good sex life.

Rebutting claims of assault and abuse constantly made on social media by his exwife against him, Mr Mubarak noted that he did not abuse her, whether physically or otherwise, but that she had weaknesses that eventually led to the collapse of the marriage. Notwithstanding, he said that she had strengths that included the good sex she offered and her culinary skills.

“…She had her strengths – good sense of humor, loved to read , loved comedy as I did, the sex was ok, the cooking was fantastic,” he wrote on Facebook.

Mr Mubarak who had remained quiet in the face of an avalanche of criticism from Ms Rasheeda Adams said he has had to react following Ms Rasheeda Adams’s comments on the assault on Mrs Lillian Dedjoe which eventually led to her death.

In her comments on the matter, Ms Adams recounted how she was continuously battered by Mr Mubarak when they were married. She emphasized that she had to leave eventually to save her life, enjoining spouses to leave when they partners physically abuse them.

But Mr Mubarak has hit back, saying he never abused Ms Adams wondering why she abandoned her court case if she really had evidence of assault on her.